U.S. Attorney Christian Secor is a UCLA student charged in connection to the U.S. Capitol riot.

Christian Secor is a UCLA student who has been charged in the January 6 U.S. Capitol riot after he was caught in photos sitting in the vice president’s Senate chair, the FBI says. Secor was arrested in California on February 16, according to the U.S. Attorney’s Office for the District of Columbia.

The 22-year-old Secor was seen in videos and photos sitting in the chair previously occupied by Vice President Mike Pence, the FBI said in a criminal complaint. He was also seen carrying a flag throughout the Capitol and onto the Senate floor after breaching the building during the siege, FBI agents said.

Secor and UCLA have not commented about his arrest. It was not immediately clear if Secor has hired an attorney who could comment on his behalf. The case against Secor was unsealed on February 17 after he appeared in court for the first time.

Here’s what you need to know about Christian Secor:

1. Secor Could Be Seen Carrying an ‘America First’ Flag & the FBI Says He Was in a Crowd of Dozens That Overwhelmed 3 Capitol Police Officers During the Siege

According to the FBI, agents received tips about Secor to the FBI media submission portal and the FBI tipline between January 17 and January 22. At least 11 tipsters identified Secor as one of the riot participants who had entered the U.S. Capitol during the pro-Trump siege on the day a joint session of Congress, overseen by Vice President Mike Pence, was set to certify President Joe Biden as the 2020 election winner.

The FBI wrote in a criminal complaint filed in Secor’s case, “These tipsters provided images and videos of Secor inside the U.S. Capitol Building, both standing on the floor of the Senate chamber, and sitting in the Chair of the Presiding Officer on the upper tier of the two-tiered dais at the head of the Senate chamber. This seat is normally occupied by either the Vice President of the United States and President of the Senate, the President Pro Tempore, or another Senator acting as the Presiding Officer. These images were widely circulated via both mainstream news outlets and on social media platforms.”

The FBI said Secor was seen in the images and videos wearing a red “Make America Great Again” hat that was covered in several stickers, including a blue circle with the letters AF in white writing on the bill, along with a black jacket, black gloves, tan pants and and a T-shirt with an “adulterated American flag and the letters ‘IMER’ visible in white writing.” The FBI said he was also carrying a large blue flag that said “America First” on it.

According to the criminal complaint, Secor was also seen in a video recorded by The New Yorker that was aired on MSNBC. Secor was seen in the video on the floor of the Senate and sitting in the chair previously occupied by Pence, with the America First flag against the wall behind him, the FBI said. Surveillance video provided to investigators by the Capitol Police also shows Secor in other parts of the Capitol, including the east corridor and the Senate gallery, the FBI said.

Investigators said Secor was at one point seen in surveillance video among rioters who were trying to push through a doorway blocked by three Capitol Police officers. The FBI said the actions of Secor and the others pushing on the double doors blocked by the officers caused the doors to open and “dozens of additional rioters flooded into the building. The Capitol Police officers were shoved by the crowd, at times trapped between the doors and the crowd, and eventually pushed out of the way of the oncoming mob. Law enforcement’s efforts to keep out the additional rioters were frustrated by the crowd inside pushing on the doors, including Secor.” 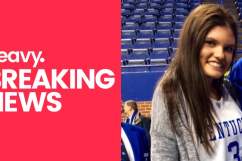 2. Secor Used a Nickname Referencing a Mass Shooter on Social Media, Praised the 2017 ‘Unite the Right’ Rallygoers, Said Fascism Is ‘Epic’ & Was Part of a Far-Right Group of UCLA Students, the Feds Say

According to the criminal complaint, Secor was identified by a tipster who is a fellow UCLA student and recognized him from being a founder of the “America First Bruins,” a far-right organization on the California campus associated with Nick Fuentes, who runs a podcast called “America First.” Secor is also tied to Fuentes’ group, the Groypers, according to the FBI. The FBI said in the Secor complaint, “The Groypers are a network of alt right figures who are vocal supporters of white supremacist and ‘America First’ podcaster Nick Fuentes.”

The FBI said Secor used the nickname online “Scuffed Elliot Rodger,” a reference to the man who killed 7 people in Isla Vista in 2014. Rodger has become a hero to some in the alt right. According to the FBI, tipsters said Secor defines himself as a fascist, posts threats online and has advocated for a “whites only” nation. According to the FBI, another tipster provided photos of Secor at a far-right rally in Huntington Beach, California.

Secor posted on Twitter using the account “@fullautonat,” according to the FBI, which reviewed his posts and account, according to the criminal complaint. The FBI said in the complaint that Secor posted a photo on his Twitter with Fuentes, who the FBI describes as “a public figure known for making racist statements and denying the Holocaust.” Secor has since locked the account.

According to the FBI, Secor described fascism as “epic” in one tweet, valorized the 2017 Charlottesville tiki torch march which featured chants of “Jews will not replace us.” The FBI said Secor also claimed on Twitter to be an intern for Michelle Malkin, and wrote in a tweet that mentioned her, “Just watch the Nick Fuentes highlights. We support nationalism everywhere. What we don’t support is Israel influencing out politics or extreme Jewish over representation in politically relevant sectors.”

3. Secor, Who Is From Costa Mesa, Was One of the ‘Groypers’ Who Destroyed a Monolith in Atascadero, California, in December 2020

Christian Secor is a threat and has made numerous posts that indicate that threat, the 4th photo depicts Christian Secor on a Bruin Republicans (now self identifying as nationalist) field trip to a shooting range; indicative of an access to firearms. pic.twitter.com/FEam4V6bkN

Tipsters told the FBI, “Secor is known to follow an extreme ideology and invite white nationalists to speak at engagements on campus.” The FBI also cited a January 8, 2021, article from Left Coast Right Watch titled “Here’s the Nazis Who Toppled That Monolith.” According to the LCRW report, Secor was among the “Groypers” who livestreamed themselves replacing a monolith that had appeared in Atascadero, California, in December 2020.

“Streamed to the white supremacist friendly, Twitch alternative DLive a group of ‘America First’ Groypers clad in military fatigues, Trump merch, and night vision goggles toppled the Atascadero, CA monolith, the third installation of what appears to be a guerrilla art project reminiscent of 2001: A Space Odyssey,” LCRW wrote.

Secor first caught the attention of fellow UCLA students for his social media activities in 2020 after he formed the America First Bruins group on campus. Matthew Richard, a UCLA student, posted a March 2020 Twitter thread about Secor.

“Christian Secor is a threat and has made numerous posts that indicate that threat, the 4th photo depicts Christian Secor on a Bruin Republicans (now self identifying as nationalist) field trip to a shooting range; indicative of an access to firearms,” Richard tweeted. ”

According to the U.S. Attorney’s Office for D.C., Secor was charged with assaulting, resisting or impeding officers, along with aiding and abetting others in that same charge and civil disorder, along with aiding and abetting for that charge as well. He was also charged with obstructing an official proceeding, entering and remaining in restricted buildings or grounds and violent entry and disorderly conduct.

Students at UCLA have called for Secor’s group, the America First Bruins, to be shut down. “We knew there were warning signs to this level of extremism and violence and hatred,” UC Student Association President Aidan Arasasingham told the Orange County Register. “So why did our university and proper authorities not intervene before it was too late, before a UCLA student was sitting in the chair of the vice president after inciting a violent mob.”

Grayson Peters, a Jewish student who was among those to previously call attention to Secor, told the Register, “It is a very surreal feeling that the people you are walking past on campus, or who you might have a class with, might be people who think you don’t belong in this country, or wish you dead.”

5. Secor, Who Is Being Held Without Bail Pending a Detention Hearing, Moved Back in With His Mom After the Riot & Bragged He Would Not Be Caught Because He Destroyed His Phone

Secor was arrested by the FBI at his home in Costa Mesa, California, on February 16, according to prosecutors. A tipster told the FBI Secor had moved back in with his mother after the riot and had bragged that he would not be caught and charged for his participation in the incident because he had got rid of his phone and car, according to the criminal complaint.

Another So Cal arrest by the ⁦@FBILosAngeles⁩ of a suspect wanted for alleged crimes at the US Capitol. This one was in Costa Mesa. My story @cbsla 6pm #uscapitol #insurrection #cbsla pic.twitter.com/xA4BYVVluB

Secor appeared in court for the first time on February 17 and was ordered to be held in jail without bond pending a yet-to-be-scheduled detention hearing, according to CBS Los Angeles.

Loading more stories
wpDiscuz
0
0
Would love your thoughts, please comment.x
()
x
| Reply
Christian Secor is a UCLA student who has been charged in the January 6 U.S. Capitol riot after he was caught in photos sitting in the vice president's Senate chair, the FBI says.