Christopher C. Miller is the acting Secretary of Defense of the United States. Miller, a retired Army Green Beret, replaced Mark Esper, who was fired by President Donald Trump on November 9, 2020.

Miller, 55, is a combat veteran and has bounced between the White House and the Pentagon since 2016. He previously served as the assistant secretary of defense for special operations and low-intensity conflict and was most recently the director of the National Counterterrorism Center, according to his biography on the Department of Defense website.

Trump announced the personnel change in a tweet nearly a week after the presidential election and days after Decision Desk HQ and several media outlets called the race for his opponent, former vice president Joe Biden. Trump tweeted, “I am pleased to announce that Christopher C. Miller, the highly respected Director of the National Counterterrorism Center (unanimously confirmed by the Senate), will be Acting Secretary of Defense, effective immediately. Chris will do a GREAT job! Mark Esper has been terminated. I would like to thank him for his service.”

Miller has not commented on his new role in the Trump administration. The Department of Defense has not yet issued a statement on the change in leadership. He will be the fifth Secretary of Defense during Trump’s time in the White House.

Here’s what you need to know about new acting Secretary of Defense Christopher C. Miller:

1. Miller Was an Aide to President Donald Trump on the National Security Council From 2018 to 2019

GettyNational Counterterrorism Center Director Christopher Miller departs after testifying at a Senate Homeland Security and Governmental Affairs Committee hearing on “Threats to the Homeland” on Capitol Hill on September 24, 2020, in Washington, D.C.

Miller has served in the Trump administration since 2018, when he was named special assistant to the president and senior director for counterterrorism and transnational threats at the National Security Council, according to the DOD website. “In this position, Mr. Miller was responsible for strategic level policy making and implementation, and support to senior NSC and White House leadership.”

In January 2020, Miller moved to the Department of Defense and was sworn into his role as assistant secretary of defense for special operations and low-intensity conflict. According to the DOD, Miller was responsible for “overseeing the employment of special operations forces in counterterrorism, Military Information Support Operations (MISO), Information Operations, unconventional warfare, irregular warfare, direct action, special reconnaissance, foreign internal defense, counter proliferation, sensitive special operations, and personnel recovery/hostage issues as specified by the Secretary of Defense.”

In August 2020, he was confirmed by the Senate to be the director of the National Counterterrorism Center in the Office of the Director of National Intelligence. He was nominated to that role in May 2020.

The move to shift Miller after the election is an unprecedented one, according to The Associated Press. According to The AP, Esper had a “strained relationship” with Trump that collapsed after civil unrest across the country led to a debate in the administration about the military’s role in responding to it. Esper opposed using active-duty troops on the ground in states where unrest was occurring.

The AP wrote, “It is the first time in the modern era that a president seeking reelection has removed his Pentagon chief after Election Day. Presidents who win reelection often replace Cabinet members, including the secretary of defense, but losing presidents have kept their Pentagon chiefs in place until Inauguration Day to preserve stability in the name of national security.” 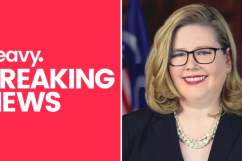 2. Miller Served in the U.S. Army From 1983 Until 2014, Including in Iraq & Afghanistan, & Commanded an Army Unit Tasked With Tracking Down Osama Bin Laden Before 9/11

Miller is an Army veteran and retired Army Special Forces officer who served in Iraq and Afghanistan, according to his DOD bio. Miller was commissioned in the Army as an infantry officer in 1987 after participating in R.O.T.C. while studying at George Washington University. He started his career in the Army in 1983 as an enlisted infantryman in the Army Reserve and served as a military policeman in the District of Columbia National Guard.

Here's the new Acting SecDef as a fighting AOB commander in 2001 @5thForces pic.twitter.com/cVWwvXwi5K

During his time in the Army, in 1999, Miller was part of a pre-9/11 Army unit tasked with tracking down Osama Bin Laden, he told the Senate before his confirmation hearing to the director of the national counterterrorism role.

Throughout his career, he served within other special operations organizations, culminating with command of the 2nd Battalion, 5th SFG(A). Mr. Miller participated in the initial combat operations in Afghanistan in 2001 and Iraq in 2003, in addition to numerous follow-on deployments to both theaters, and has extensive inter-agency and joint special operations experience.

Miller wrote in a Senate questionnaire before a confirmation hearing in August, “I have spent my entire adult life working national security issues at all levels of the United States Government. During the course of my career as an infantry officer and special forces operator, I received specialized training in, and became a recognized subject matter expert on, the collection, use, and oversight of intelligence at the tactical, operational and strategical level for counterterrorism operations.”

3. Miller, Who Studied at the Naval War College, the Naval College of Command & the Army War College, Worked for a Defense Contractor After Retiring From the Army

Christopher Miller, who Trump announced as his acting defense secretary a few hours ago, has arrived at the Pentagon. pic.twitter.com/TxcUT2SC6b

Miller attended the Naval War College from 2000 to 2001. He graduated from the Army Ranger School as an honor graduate and leadership award winner, was awarded a Bronze Star for combat service (not for valor) and was awarded the Legion of Merit. He was among the members of the 5th Special Forces Group to receive a Presidential Unit Citation for their service in Afghanistan from 2001 to 2002.

Miller worked from 2014 to 2016 for “various defense contractors” after leaving the Army and before joining the Trump administration, he said in his Senate questionnaire before being confirmed to the national intelligence role. According to the DOD, “Upon retirement from the Army in 2014, Mr. Miller worked for over two years as a defense contractor providing clandestine Special Operations and Intelligence expertise directly to the Under Secretaries of Defense for Intelligence and Policy.” 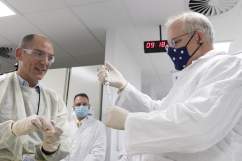 4. Miller Is an Iowa City, Iowa, Native & Says He Still Sees Himself as ‘a Kid From Iowa Who Wanted Nothing More Than to Serve His Country & Make His Parents Proud’

Miller is a native of Iowa City, Iowa, according to his DOD profile. While seeking appointment to his previous role in the Department of Defense, he was introduced at a Senate hearing by Iowa Senator Chuck Grassley.

“It’s not every day that an Iowan with such a distinguished service record comes before the Senate for consideration, so it’s a special privilege for me to be here with him today. Chris’ parents and much of his family still live in Iowa City and many years back, I actually held an event at a farm that was owned by Chris’ uncle. I am sure that his family is particularly proud,” Grassley said at the July 2020 hearing. “Chris was raised in Iowa City. After graduating from City High School, he attended George Washington University, where he majored in history and enrolled in the R.O.T.C. program. He graduated from G.W. in 1987 and accepted a commission in the U.S. Army as an Infantry Officer.”

Miller was confirmed by a Senate voice vote in August. Miller said during testimony before the Senate Intelligence Committee before his confirmation, “I still see myself as a kid from Iowa who wanted nothing more than to serve his country and make his parents proud. My father believed strongly in the nobility of public service, and I try every day to follow in his footsteps.”

Miller added, “In addition to my mother’s wisdom and example of citizenship, that’s what my sister and I aspire to emulate in all facets of our lives.”

5. Miller Is Married & Lives in Virginia With His Wife & He Is the Father of 2 Grown Daughters & a Son Who Is in College

Miller is married to Kathryn Maag Miller and lives with his wife in Burke, Virginia, according to the Department of Defense. He is the father of two grown daughters and a son, who is in college, the DOD says in his biography.

Miller said in his Senate confirmation questionnaire that he has never made political contributions. He said his wife, “is employed as an office manager for a health and environment lobbying organization. Her employment is unrelated to intelligence and national security issues.”

Miller said at his Senate hearing, “My wife graciously stood with me through this 32-year odyssey and raised our three children into magnificent adulthood. Their character, optimism for the future and goodness are my motivation. They give me hope for the continued greatness of this wonderful experiment that is the United States of America.”