OnScene TV A couple was followed home, shot and robbed in a home invasion, police say. They are expected to survive.

A Houston couple was followed home from a game room, ambushed and shot in a home invasion robbery, police said. They are expected to survive, according to police. No arrests have been made and the investigation into the Tuesday, December 21, 2021, incident remains underway, police said.

The shooting happened about 3 a.m. in the 12900 block of Harvey Lane in the Northshore area of the city, according to the Houston Police Department. The man, who is in his 30s, was hospitalized with a gunshot wound, while a woman, the man’s girlfriend, suffered a minor gunshot wound, police said. Two men were involved in the robbery, police said.

A 13-Year-Old Girl Was Sleeping Inside the Home When the Robbery & Shooting Occurred, Police Say

Houston Police Lieutenant Emanuel Pavel said at the scene Tuesday morning, “When officers arrived they two victims that were shot. The first victim was a male, mid-30s, shot four times in the stomach, groin and leg area. The second victim was a female in her early 30s, shot one time in the buttocks. Both were transported to the hospital and they are both expected to survive.” Pavel added, “There was also a young teenage girl. She was unharmed.” The teen, the victim’s daughter, was sleeping at the time, police said.

Pavel said the preliminary investigation has led police to believe the shooting was part of a home invasion robbery. Pavel said the couple told investigators, “They arrived home from a game room, they went inside the house. A few minutes later they saw a vehicle … pull up in their driveway. The female victim went towards the door to make sure it was closed. That is when the suspects pushed their way into the house,” Pavel said.

He added, “One had a shotgun, one had a pistol. They went inside the house, they started demanding money, pointing the weapons at them. When the victims said they don’t have any money, that’s when they started shooting at them, according to the victims.” 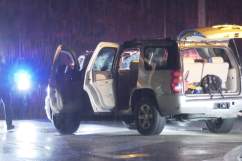 Pavel said the suspects fled from the scene in a 4-door black or blue Chevrolet Malibu sedan. Pavel said at the scene, “We’re still trying to collect as much evidence as we can. Supposedly there is also some video footage that we will be looking at, trying to figure out exactly what occurred.”

He added, “The only information we have on the suspects is that one was a Hispanic and one Black male, mid 30s, wearing all black. Anybody who has any information regarding this incident please feel free to call our CrimeStoppers at 713-222-TIPS with any information, it would be very useful.”

Pavel, when asked about an uptick in follow-home robberies said his advice to the public would be, “Immediately if you see something suspicious, please call the police. The faster you call us and let us know what is occurring we can try to get here as soon as possible. Also try to make sure that when you do drive home, if you see something suspicious, somebody following, a vehicle, the same color vehicle, following you around, I would suggest not to go home, call 911. It’s better to be safe than sorry.”

He said, “Talking to the officers, there was actually a similar incident fititng the same description earlier in the last week. The story is kind of similar, same type of home invasion. So, it is happening. So be on the lookout. See if anybody is following you home. It’s better to be safe than sorry, give us a call and we will try to get there as soon as possible to get catch guys while they are in the act.” According to police, the previous incident happened in Northeast Houston.

Loading more stories
wpDiscuz
0
0
Would love your thoughts, please comment.x
()
x
| Reply
A Houston couple was followed home from a game room, ambushed and shot in a home invasion robbery, police say. They are expected to survive. No arrests have been made.