Getty In this NASA digital illustration handout released on February 22, 2017, seven TRAPPIST-1 planets are shown as they might look as viewed from Earth using a fictional, incredibly powerful telescope./ In this handout provided by the National Aeronautics and Space Administration (NASA), astronomer Nikole Lewis of the Space Telescope Science Institute in Baltimore presents research findings during a TRAPPIST-1 planets briefing on February 22, 2017 at NASA Headquarters in Washington, DC. Researchers revealed the first known system of seven Earth-size planets around a single star called TRAPPIST-1.

NASA announced a monumental discovery on this day in history. On February 22, 2017, NASA revealed that the Spitzer Space Telescope spotted “the first known system of seven Earth-size planets around a single star,” known as TRAPPIST-1. Three of the seven planets are “firmly located” in the habitable zone, where the planets were most likely to have liquid water.

Further research revealed additional exciting discoveries. NASA is hosting a talk with experts for the anniversary of the discovery at 2 p.m. February 22, 2022. 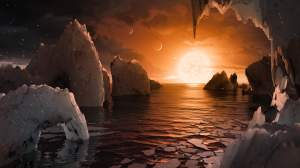 GettyIn this NASA digital illustration handout released on February 22, 2017, an artist’s concept allows us to imagine what it would be like to stand on the surface of the exoplanet TRAPPIST-1f, located in the TRAPPIST-1 system in the constellation Aquarius. Because this planet is thought to be tidally locked to its star, meaning the same face of the planet is always pointed at the star, there would be a region called the terminator that perpetually divides day and night. If the night side is icy, the day side might give way to liquid water in the area where sufficient starlight hits the surface.

NASA’s exoplanet discovery, detailed in a February 22, 2017 press release, set a new record for the highest number of habitable zone planets around a star. NASA explained that all seven planets could have liquid water, but the likelihood was highest around the three planets in the habitable zone, where the distance from the star and its temperatures increase the possibility of the presence of water.

“This discovery could be a significant piece in the puzzle of finding habitable environments, places that are conducive to life,” Thomas Zurbuchen, associate administrator of the agency’s Science Mission Directorate in Washington, said in the press release. “Answering the question ‘are we alone’ is a top science priority and finding so many planets like these for the first time in the habitable zone is a remarkable step forward toward that goal.”

The exoplanet system was named for a telescope in Chile, Transiting Planets and Planetesimals Small Telescope (TRAPPIST).

“The seven wonders of TRAPPIST-1 are the first Earth-size planets that have been found orbiting this kind of star,” said Michael Gillon, the principal investigator of the TRAPPIST exoplanet survey at the University of Liege, Belgium, in the press release. “It is also the best target yet for studying the atmospheres of potentially habitable, Earth-size worlds.”

The TRAPPIST-1 system has seven Earth-size planets—and at least three are in the "habitable zone." What will @NASAWebb find when it takes a closer look? Talk with experts in our next @TwitterSpaces. Set a reminder to join & share questions using #AskNASA https://t.co/K3H6mqKpsf

Scientists created scientific models to study bombardment of the planets in TRAPPIST-1, or the amount of impact the planets experienced after their formation, according to a Rice University press release from November 2021. Bombardment is one of the elements to help determine whether a planet may have been suitable for life.

“After rocky planets form, things bash into them,” said astrophysicist Sean Raymond of the University of Bordeaux in France, according to the press release. “It’s called bombardment, or late accretion, and we care about it, in part, because these impacts can be an important source of water and volatile elements that foster life.”

The planets are in near-perfect harmony, the scientists discovered, and they created models to determine how much bombardment they could have sustained and still remain in harmony.

“We can’t say exactly how much stuff bashed into any of these planets, but because of this special resonant configuration, we can put an upper limit on it. We can say, ‘It can’t have been more than this.’ And it turns out that that upper limit is actually fairly small,” Raymond said. “We figured out that after these planets formed, they weren’t bombarded by more than a very small amount of stuff,” he said. “That’s kind of cool. It’s interesting information when we’re thinking about other aspects of the planets in the system.”