Lyndon McLeod, the Denver and Lakewood shooter, left behind voluminous social media posts on Instagram and Twitter that painted a picture of a man with a string of business failures who turned to writing violent fiction as a way out.

On Twitter, McLeod, 47, who once owned a failed tattoo parlor before he slew tattoo artists in a shooting spree, engaged in multiple feuds, including one that drew the attention of the FBI, using his pseudonym, Roman McClay. One Twitter page, in the name James Three, contained a single phrase in its description section: “f*** off.” A lot of that page is devoted to trolling and harassing a fellow author who himself tweeted that McLeod had threatened him.

He wrote about murder: 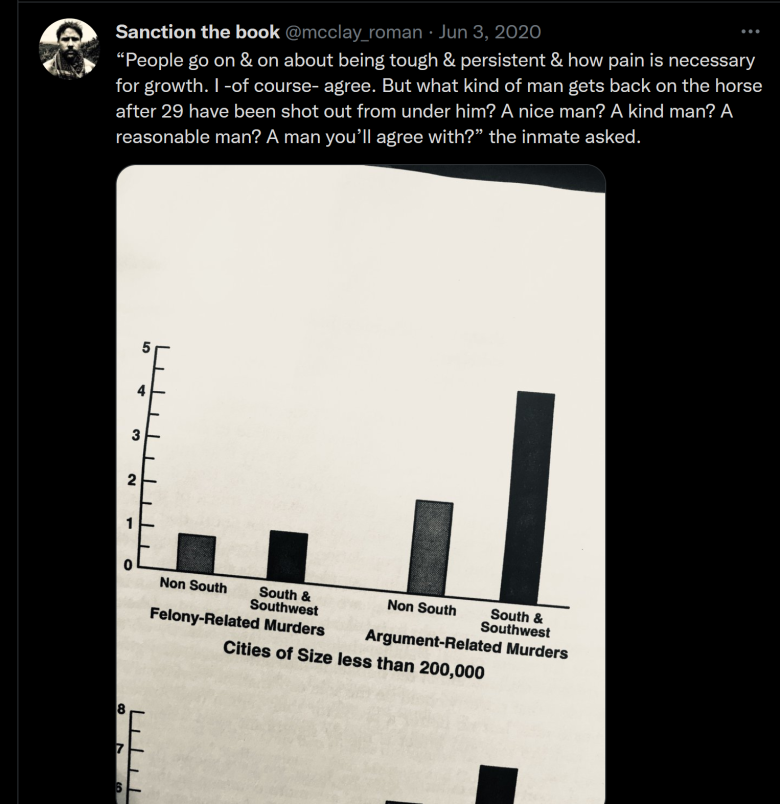 McLeod railed against homosexuals in posts, referred to people derisively as “Yankees,” and appeared obsessed with Nordic genetics. He mocked an FBI investigation into him that authorities acknowledge did not end up in an arrest, tweeting a link to his book series at the agency:

“Polite Roman… (His kind have manners, unlike you Yankee homosexuals),” he wrote on the James Three page, referring to his own pen name.

McLeod died in the killing spree, during which he ended the lives of five people, several of whom were well-known tattoo artists, and wounded two more, including a Lakewood, Colorado, police officer. Under his alter ego McClay, McLeod published a series of books called “Sanction” that involved a billionaire rewriting the DNA of violent people, including serial killers. He also had a second Twitter page called Sanction the Book, and an Instagram page and website devoted to it.

“It does appear that the offender was targeting specific people in this case,” Denver Police commander Matt Clark said in a news conference. “The victims were known to the offender.” You can read about his five victims here; several were tattoo artists. 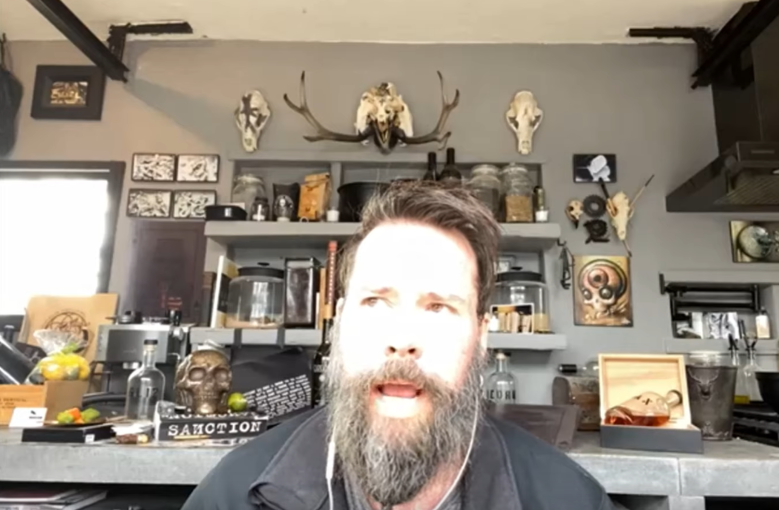 ABC reported, through sources, that McLeod, who once owned a Denver tattoo parlor himself, “harbored extremist views and had a history of psychiatric episodes.”

Journalist Kyle Clark wrote on Twitter, “The shooting spree suspect’s business, Flat Black Ink Corp, published a novel in which a man, also named Lyndon, shoots and kills people at a tattoo shop on 6th Avenue.” The business was delinquent.

Of the Sanction the book series, he wrote on Instagram, “My readers are exceptional. I wrote this book for 1%ers. It’s no joke; I refused to write it to be “popular.” The men (and rare women) who get my novel have given me a bolstering, a kind of infusion that has convinced me that all is not lost. I take this moment to express appreciation to all of you. You fuckers know who you are..”

On the Jack Three Twitter page, McLeod wrote about white supremacy and the boogaloo movement. He retweeted a post that said, “The group is white supremacist and aims to start a race war it calls the ‘boogaloo.'” His response? “Heh.”

“Americans have been sold the lie that a Connecticut Yankee and a Western outlaw are the same because they’re both ‘white,'” read another tweet by McLeod. “Nothing could be more wrong (genetically speaking). From Billy the Kid (McCarty) to The Hell’s Angels, the Ulster & Highland Scots are not American.” 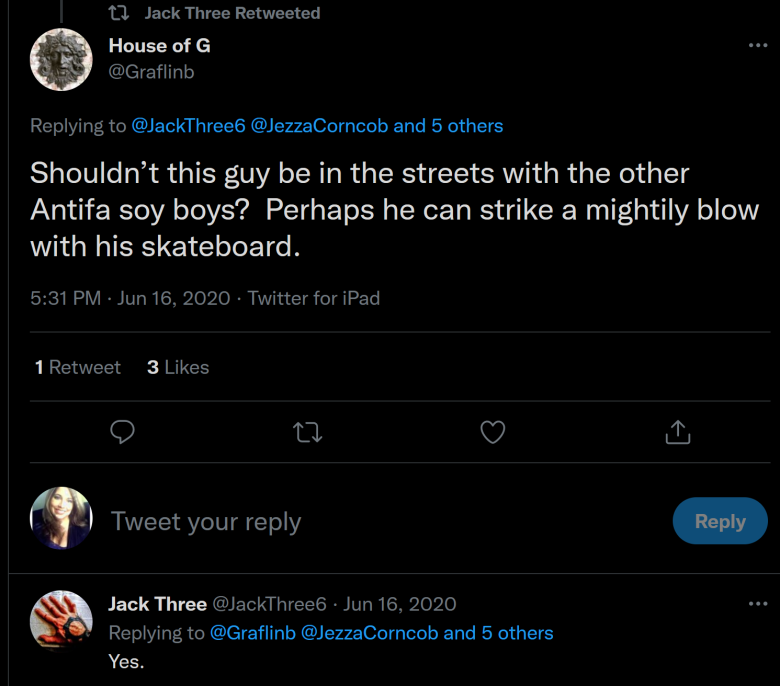 He responded affirmatively to a retweet that referred to “antifa soy boys” derisively.

McLeod, who once lived in Texas before moving to Colorado, appeared obsessed with genetics on social media as well, writing, “Moar journalism: Americans don’t understand their own history. Northern yankee fux are genetically different from southern rednecks. We are nothing alike.”

“i can always tell when society is turbulent” – RM

“I get DM’s from city chicks wanting to move up here and my pals post pics of my book. It’s subconscious, ya know?” – RM pic.twitter.com/jqHznl30Mr

In another post on Twitter, he wrote, “These right wing larpers are pro government. Don’t let them fool you. They’ll send the cops to murder you in lieu of handling it themselves.” It’s not clear who he was referring to exactly. 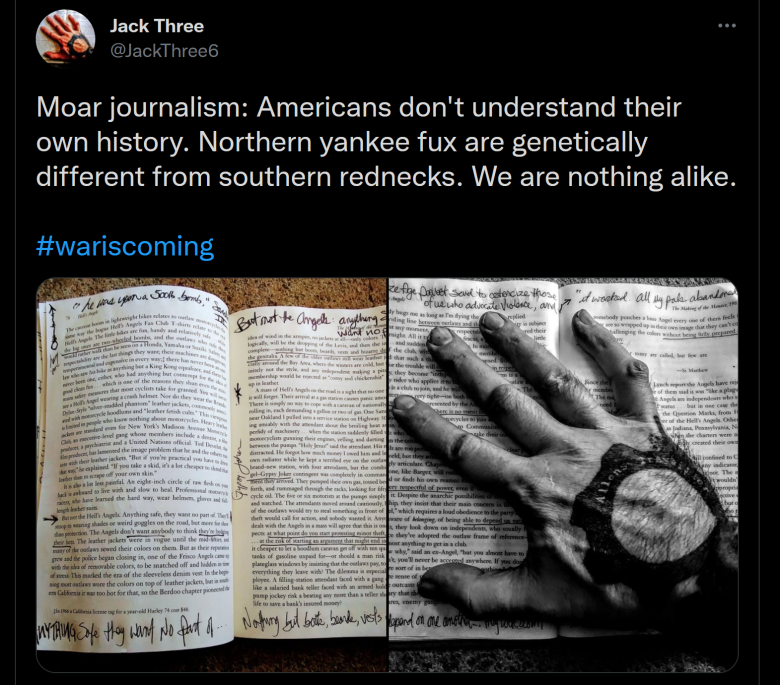 Police said that McLeod was on the radar of law enforcement through two previous investigations, neither of which led to state or federal charges. They took place in 2020 and early 2021, according to the Denver police chief.

He engaged in threats against another author that landed him a visit from the FBI.

Although police did not reveal details of those investigations, a fellow science fiction author named Travis Corcoran wrote on Twitter, “Remember a yr or so back when Roman McClay, author of ‘Sanction: The Book.’ told me that he was going to come to my house, kick in my door, murder me, and cut off my wife’s head? well…looks like he just murdered 4 people and then got capped by the cops.”

On a Twitter page in the name Jack Three, McLeod wrote about this incident. “As a jounalist -Jack 3- found out that Travis called the FBI on @mcclay_roman, Has anyone upbraided @MorlockP for calling himself an AnCap whilst also calling The FBI to settle his disputes? How @NoLongerBennett @vlatko can support this Yankee Fraud is God’s own private mystery,” McLeod wrote. @morlockP is the Twitter page of Corcoran.

He also wrote, “Apparantly, even the FBI admitted the entire thing was asinine…” and then made claims about Corcoran. 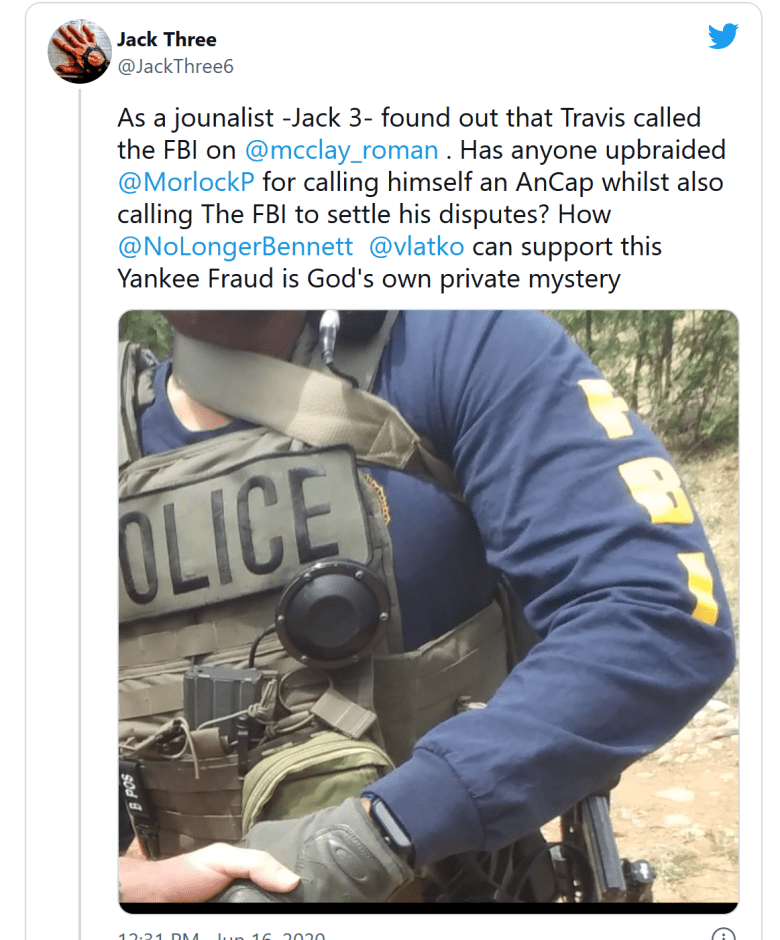 Another Twitter user wrote in 2020, “Roman McClay is the kind of guy who’s a****** enough to get the FBI on his a** and then kind enough to become friends with them when they finally find him. I love that about him.”

The writer added, “Meet Roman McClay – ‘author,’ self-styled tough guy, wannabe thought-leader. A persona carefully crafted to mimic the Ivan Throne or Cobra Tate style of a ‘leader of men, and a grifter of them too.'”

McLeod got in a feud with yet another Twitter user, writing, “Because Roman is poor? True. But… Why would poverty be excuse for owning a Tesla? Heh. Bob, you’re a skinny dork. Stop trying to win some internet game. You’d piss your pants if Roman showed up to your twenty.” 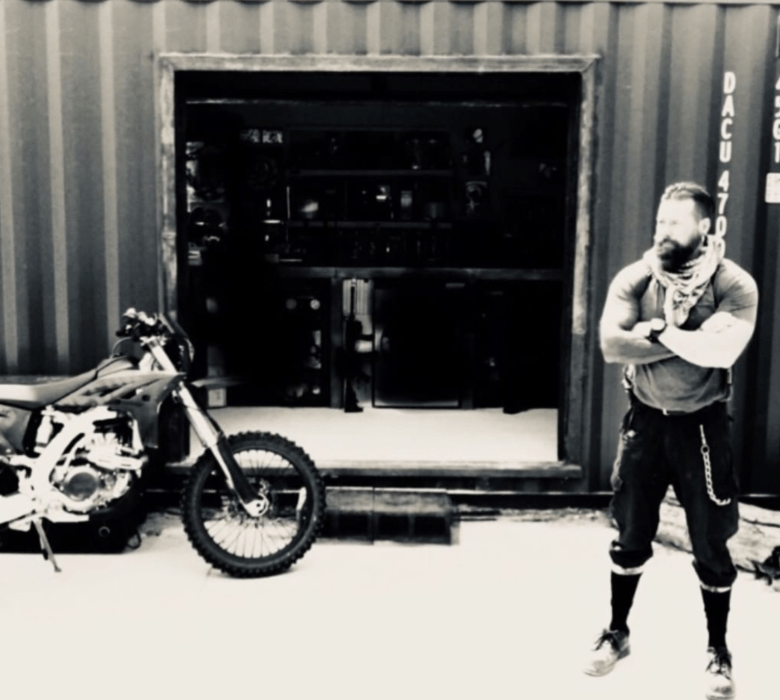 According to KDVR-TV, McLeod wrote and published a series of books called ‘Sanction’ under the name Roman McClay.”

The main character was named after McLeod, and he said the narrator was “artificial intelligence,” according to the television station. Journalist Kyle Clark described the gunman’s work this way: “The shooting spree suspect’s business published a three-book series of what could be described as alpha male sci fi, published from 2018-2020, celebrating brutal violence against the characters’ perceived enemies and graphic sexual assaults.” 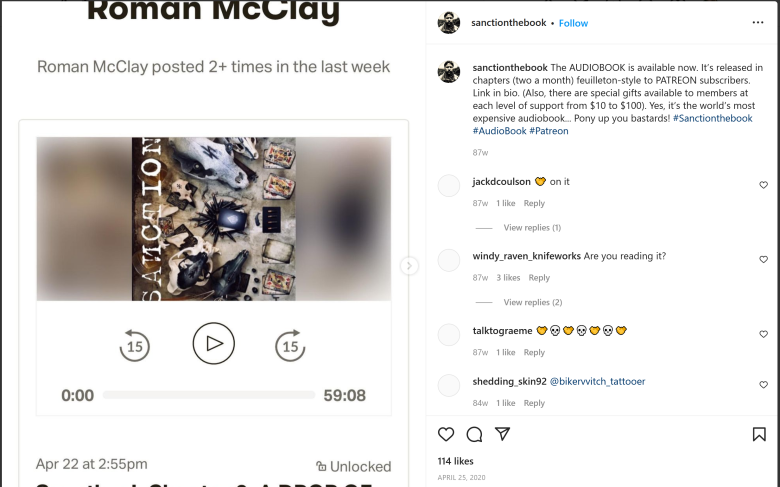 The Instagram page for the books has a profile that reads:

A review of one of the Sanction books reads, “F*** you, I’m can’t summarize this. This plot is like three angry gorillas screaming at your soul. You could think and consider and try to understand one but all three at once is not going to happen. The BASIC plot: a politician/billionaire wants to use gene editing tech to rewrite the DNA of criminals. Think serial killers and just generally violent people. This plan requires the creation of two different styles of artificial intelligence. They have a plan, and other plans, and inside those plans are more plans, and inside those plans is a middle finger pointed right at God. And when God is offended, bad things happen to His creation.”

Another review read, “I don’t think you can understand the Nordic man, the northern woman, the people of the steppe, the tribal elders, and the young warriors, I don’t think you can feel their hearts, the massive seawater and hydrostatic pressure of love that lives inside the peoples of old, until you’ve read Sanction.” 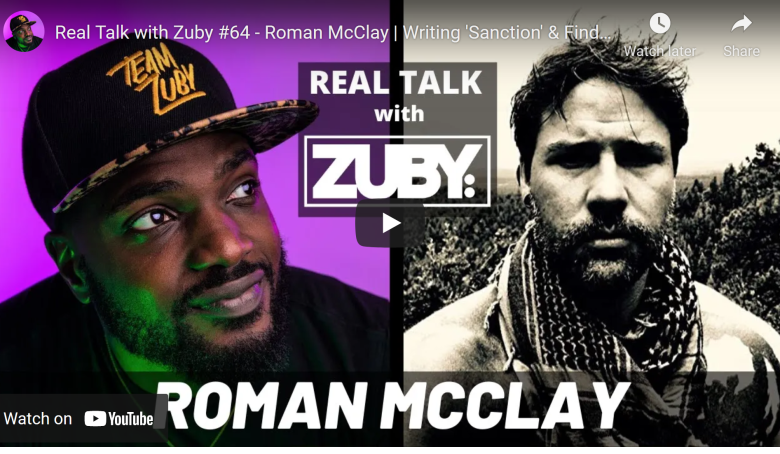 McLeod was interviewed by YouTube host Zuby about his beliefs and background. In the video interview from 2019, at about 10 minutes in, he talked about having a string of business failures. The video has now been removed from YouTube.

He said that was his philosophy: “If it fails,” learn and do it again. He said he did that 11 times with “minimal complaining… failure is normal. You can not sit around and wallow in this.”

He said he rebuilt his life and businesses over and over again. At age 42, he noticed on the 12th time, that it was different; this time, he claimed, there was “so much malice involved” by business partners.

“Fraud was committed against me,” he alleged, but he said the courts said he had no standing. He went from making $25-30,000 a month in cash to zero “all in an instant.” He had to sell all his assets, including his house. All of the people he had trusted in life didn’t like him, he told the host.

Unless a person is “sociopathic” with no emotions, “that’s going to hit you,” he said, admitting that he went to a “very dark place” and he had “all kinds of ideas of what I was going to do in order to make this right.” He decided to do something “creative with your pain” and do something positive. He gave himself an out. If that book thing doesn’t work, he would go to another plan, he thought.

He said writing books was a pro-social and ethical thing that he could do with the “pain and malice and catastrophe of my life.”

Denver Police Chief Paul Pazen said in the first news briefing that there were a “series of violent incidences that we believe started in Denver…We have four significant locations where gunfire took place in the City and County of Denver.” The mayhem then continued into Lakewood, resulting in more deaths and the injury to the officer. Pazen called it a “killing spree.”