Paige Theriault is a 22-year-old woman charged with manslaughter in a deadly bar altercation caught on video. A 23-year-old woman was killed at the Lit Nightclub, part of the Crazy Cactus bar in Saskatoon, Saskatchewan, Canada, on November 5, 2022, according to police.

Theriault, who police say knew the victim prior to the fight, was initially charged with second-degree murder, but the charges were reduced to manslaughter, according to police. The brutal incident was caught on video by onlookers and spread quickly on social media.

Police said the investigation is ongoing. Police did not name Theriault or the victim in their press release, but they have been identified in social media posts. According to The Star Phoenix reporter Bre McAdam, Theriault, whose full name is Paige Theriault-Fisher, made her first court appearance on Monday, November 7. Prosecutors opposed her release and a bail hearing is set for Thursday, November 10, McAdam tweeted.

Crazy Cactus told CTV News, “Out of respect for those involved, we will not comment further at this time. We can say our establishment and staff have and will continue to provide whatever assistance we can to those involved.”

“On November 5, 2022 at 2:41 AM police attended to a business in the 200 block of 3rd Avenue South for a report of a female suffering from a serious injury. Upon arrival, responding officers located a 23 year old female with life threatening injuries. Despite lifesaving efforts by the responding officers and Medavie Health Services West, she died,” the Saskatoon Police said in a statement. “The two individuals are known to each other. Patrol officers as well as members of the Forensic Identification Section, Serious Assault Unit and the Major Crime Section are investigating.”

A video was posted on social media showing a woman identified as Paige Theriault on top of the victim, appearing to hit her repeatedly. At the start of the video, the bar’s DJ can be heard announcing that there’s a “b**** fight” happening on the dance floor. Several people could be seen watching the brawl. The video shows a pool of blood underneath the victim.

The bar, the Crazy Cactus, where the incident occurred, has not commented about the deadly fight. The video spread quickly on social media, including TikTok, Twitter and Instagram. Facebook and Twitter have since removed video of the fight from their platforms because of its violent content. Authorities have not said what led up to the fight. 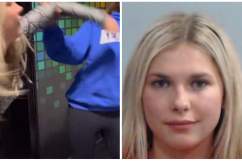 Theriault Lives in Calgary & Is Originally From Saskatoon, According to Her Facebook Page, Which Has Been Flooded With Posts Calling for ‘Justice for Hodan’

Loading more stories
wpDiscuz
0
0
Would love your thoughts, please comment.x
()
x
| Reply
Paige Theriault is a 22-year-old Canadian woman charged with manslaughter after a 23-year-old woman was killed in an incident caught on video at a Saskatoon nightclub.