Sidney Poitier has been married twice and leaves behind second wife Joanna Shimkus and six children.

According to ABC News, Poitier died at the age of 94. His death was announced on January 7, 2022. He was the first Black man to win an Academy Award. Deputy Bahamian Prime Minister Chester Cooper told ABC News he was “conflicted with great sadness and a sense of celebration when I learned of the passing of Sir Sidney Poitier.” 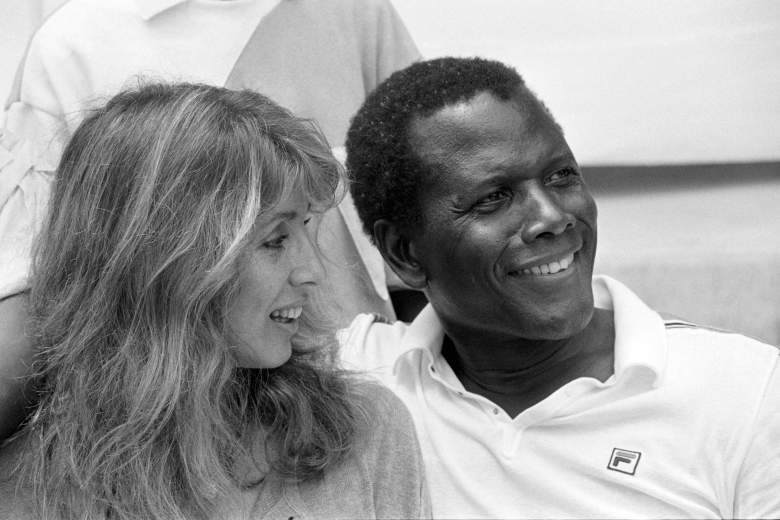 According to IMDB, Joanna Shimkus was born on October 30, 1943 in Halifax, Nova Scotia, Canada.

She married Sidney Poitier on January 22, 1976, and she is still alive. A 1971 article in the St. Petersburg Times described Shimkus as the daughter of a Jewish father and Catholic mother who became a model and “photographs exquisitely,” with long-shoulder-length brown hair and green eyes.

2. Shimkus Was Raised in Canada, Spending the First Years of Her Life on a Halifax Farm 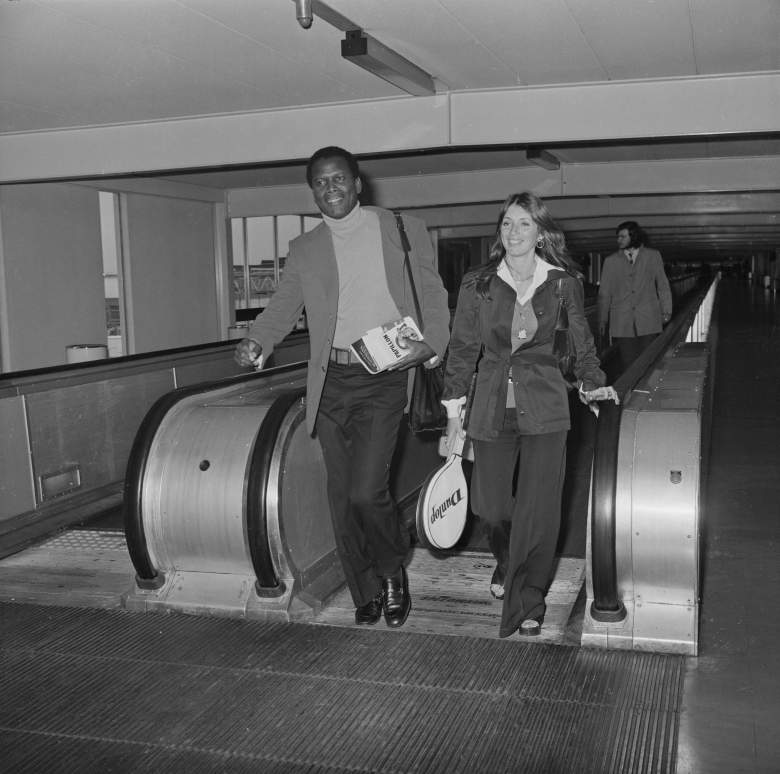 A 1969 article in The Toledo Blade reported that Shimkus had gone sailing on the Caribbean with Poitier and friends.

She was starring opposite Poitier in her first American film, Universal’s “Lost Man.” She was born “in the rugged sea country of Nova Scotia,” the article says.

Shimkus was rejected by her father, a Royal Canadian Naval officer who “didn’t care to have the baby around him” and spent her first four years “on her grandmother’s farm in Halifax,” giving her a happy early childhood. She later moved to Montreal with her parents, but they separated and left her “pretty much on her own.”

By age 23, she had appeared in seven movies. She was described as “hauntingly beautiful” and “appealing.”

She starred in French films and then a Richard Burton movie, according to a 1970 article in the Calgary Herald.

2. Poitier & His Wife Had Two Children Together 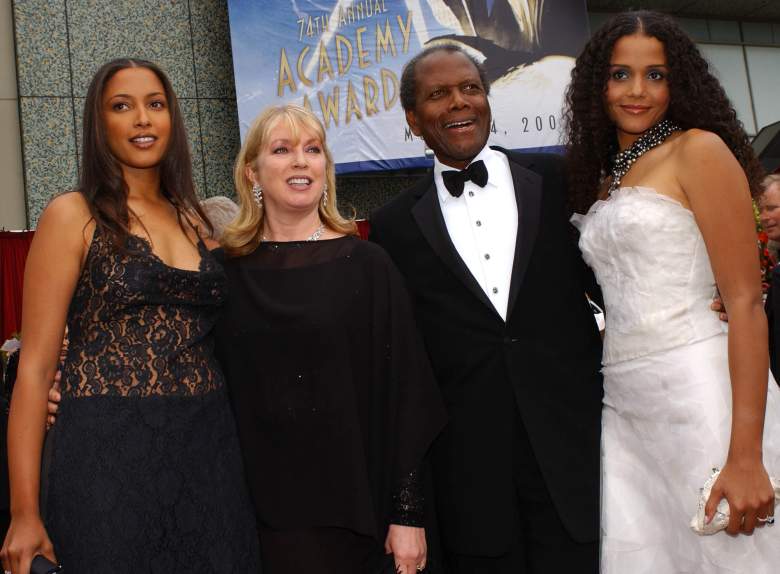 Poitier and Shimkus had two children together, according to IMDB. Their names are Anika Poitier and Sydney Tamiia Poitier.

Daughter Sydney is also an actress according to her IMDB profile.

Poitier was the youngest of seven children raised in “extreme poverty” by tomato farmers in the Bahamas, according to Oprah.com.

He moved to Miami to live with his older brother at age 15, and then moved to New York with only $3 in his pocket, the site reported. He soon began auditioning for acting jobs.

“He has four daughters from his marriage to his first wife, dancer Juanita Hardy,” Oprah.com reported.

Poitier had children Beverly, Pamela, Sherri, and Gina, from his first marriage. They were poor. He described to Oprah.com, “My daughter Pam was about to be born, and Beth Israel Hospital had told my wife and me that it would be $75 to cover the birth.” He borrowed money against their furniture to pay the bill.

Of Hardy, Poitier told Oprah, “She was a very supportive person. She was a different kind of person than I was, but she knew it meant a lot to me to be the way I was.”

His daughter Gina Patrice Poitier Gouraige preceded him in death.

5. Poitier’s First Marriage Ended Due to an Affair With Diahann Carroll 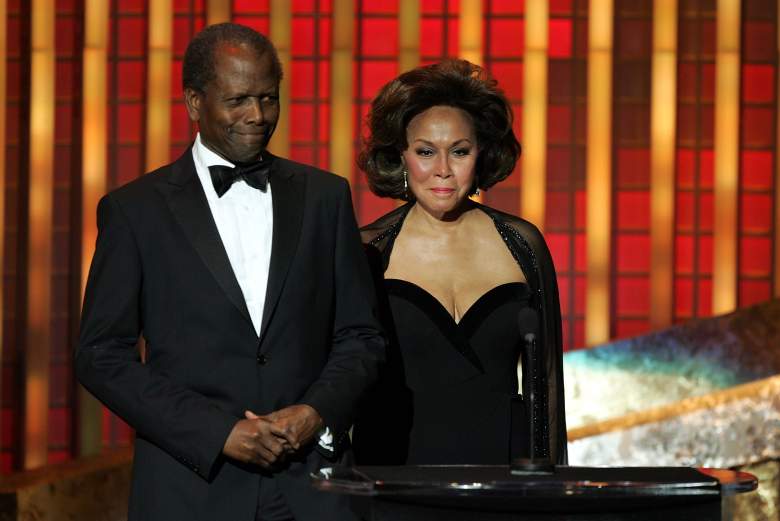 GettyPresenter Diahann Carroll (R) and Sidney Poitier are seen on stage at the 36th NAACP Image Awards at the Dorothy Chandler Pavilion on March 19, 2005 in Los Angeles, California. (Photo by Kevin Winter/Getty Images)

According to a 1980 article on People.com, an affair with actress Diahann Carroll wrecked Poitier’s first marriage.

He described to People meeting Carroll:

We had not been on the set of Porgy and Bess in 1959 more than a few days when I realized that she was unique. She had fantastic cheekbones, perfect teeth and dark, mysterious eyes. She was confident, inviting, sensuous—and she moved with a rhythm that absolutely tantalized me. I invited her to dinner, telling her that since we were both married we would talk about our absent loved ones. And we did. I acted very, very gentlemanly for weeks, but halfway through the picture we fell in love. As I got to know her, I realized she was one of the brightest women I had ever known.

He didn’t get divorced for six years, saying to People, “To a large degree I felt trapped by my four daughters. They were young and I loved them. And my father had thoroughly indoctrinated me when I was young that, as a law of life, a parent should take care of his children even if it means not putting food in his own mouth.”

His daughters resented him, he told People. “I think there was a time when they were as mad as hell at me because of the threat to their own security. Although I never severed links with them, I was a villain of sorts in their eyes. The relationship is now very healthy and free-flowing, but getting it there tested our strength and perseverance.”

He eventually got divorced, but he wanted to live with Carroll before marrying her, and she refused, which started the relationship unraveling, People reported.

Carroll described the relationship in negative terms. According to Page Six, Carroll described the relationship in her memoir: “I was only home a few days when he called to say his wife was having second thoughts. Our wedding plans would have to be postponed. When the apartment was ready and I was about to move my daughter in with me, Sidney told me he didn’t want her there . . . He changed the locks so I couldn’t get in. Then he made me write him a check to offset his purchase and decorating costs. I did as I was told, submissive and desperate.”