Vincent Paterno is a Washington man who says he wasn’t fired by FedEx over a viral video in which he said he wouldn’t deliver packages to Biden or Black Lives Matter supporters. The 39-year-old Paterno said he had already quit his job with the delivery company before the video gained attention on social media. FedEx said it was “appalled” by Paterno’s video.

Paterno, who goes by Vincent “Mrworldwide” Paterno on TikTok, posted the video on September 16. It gained attention on social media a few days later and led FedEx to issue a statement about what he said in the viral video.

In the statement, FedEx said, “We are appalled by the behavior depicted in this video, which does not reflect the views of FedEx. This individual is no longer providing service on behalf of the company.” The company’s statement led many on social media to believe that meant Paterno was fired. But the former FedEx driver said in a follow-up TikTok video that he had already put in his notice that he was leaving the job before the viral video was posted. He shared text messages he sent to his boss showing his last day was prior to FedEx’s statement.

Vincent Paterno captioned his September 16 video on the @vincentmrworldwid TikTok account, “#bidensucksballz #wethepeople.” He said in the 36-second video, which had the song “God We Need You Now” by Struggle Jennings and Caitlynne Curtis playing underneath him, “What’s up TikTok. Just wanted to come on here and let all you know if you don’t have a flag in front of your house and if you have a Joe Biden, Kamala f****** cameltoe posted up in front of your house, Black Lives Matter, I will not deliver your s***.”

Paterno added in the video, “I will not deliver your s***. I will bring that back to the station. And I’ll keep doing that s***. Have a good day.” In the comments, Paterno added, “There’s a lot of us doing this but I’m the only one to actually post 😂 😂. … We all need to take a stand and stop this bulls***.” Paterno also responded to those calling him racist by saying, “Race has nothing to do with it and yeah I’m not racist.” In another comment, Paterno wrote, “Aren’t we land of the f***** free if we don’t take a stand to this BS government kiss your freedom goodbye.”

In a September 26 video, captioned “#fakenews,” Paterno responded to news articles that reported he had been fired by FedEx. Paterno said in the video, “What’s up TikTok? I’m on here to make a video about how the media likes to flip s***. Apparently saying that FedEx had fired me after the video went viral. Hmm. … Funny, well I have a couple of text messages that I sent out to my boss in August saying that September 3 was going to be my last day. … Here’s another text message, September 13, here’s a text message that I sent to my co-worker on my last day.

Paterno added, “Crazy, how I posted that video last Saturday and that video went viral a few days ago, I think Wednesday, Thursday, didn’t know I could get fired when I didn’t work there anymore. It just shows how the media can flip s***. Stop listening to fake news. Have a good day.” 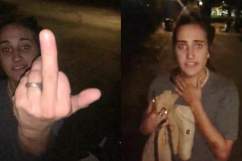 Paterno, Who Is From Oak Harbor, Washington, Says He Already Has a New Job

FedEx can't be okay with this. pic.twitter.com/R9XVDhJzL7

Paterno is from Oak Harbor, Washington, according to his now-deleted Facebook page. He now lives in Marysville with his wife, according to public records. Paterno deleted all his social media pages other than his TikTok account after the FedEx video went viral. His wife also deleted her Facebook page.

Angry commenters on his TikTok video tagged the FBI and FedEx in their posts replying to him and accused him of breaking the law by refusing to deliver packages to Biden-Harris and BLM supporters. One person wrote, “Some people get medicine delivered, including life saving medicine or medical devices. You could be hurting people.” Another said, ” ‘I want a felony charge and jail time. People get medicine delivered to them. I want him arrested.” Paterno laughed off the comments on his TikTok page. It’s not clear if Paterno actually failed to deliver any packages while he was working for FedEx because of political reasons.

Responding to a commenter who called him jobless, Paterno responded, “Jobless? I already have a job. … Bruh unemployment? What’s that? Already have a new job but thanks for the view.” Paterno has not commented about where he is currently working and his new job has not been uncovered. Paterno could not immediately be. reached for comment by Heavy.

Loading more stories
wpDiscuz
0
0
Would love your thoughts, please comment.x
()
x
| Reply
Vincent Paterno is a Washington man who says he wasn't fired by FedEx over a viral video in which he said he wouldn't deliver packages to Biden or Black Lives Matter supporters.