Getty Putin with his former wife (l) and rumored girlfriend.

Russian leader Vladimir Putin no longer has a wife, but he was married once for three decades to Lyudmila Aleksandrovna Ocheretnaya. He keeps his personal life notoriously private, but he’s been long-rumored to have a long-standing girlfriend, Alina Kabaeva, a former Olympian.

It’s believed he has two daughters with his ex-wife, who was formerly known as Lyudmila Putina, and that he possibly has children, maybe twins, with his suspected longtime former gymnast girlfriend. It’s not clear whether he has a son.

“I have a private life in which I do not permit interference. It must be respected,” Putin once said, according to The Sun.

Here’s what you need to know about Putin’s former wife and rumored girlfriend:

Putin Divorced His Wife, a Former Flight Attendant, After 30 Years of Marriage

“There are people who just cannot put up with it,” Putin said at the time to Biography.com. “Lyudmila Alexandrovna has stood watch for eight, almost nine years.” Lyudmila added, the site reports, “Our marriage is over because we hardly ever see each other. Vladimir Vladimirovich is immersed in his work, our children have grown and are living their own lives.”

GettyRussia’s President Vladimir Putin and his then wife Lyudmila

According to AS, it’s believed that Putin had two daughters with Lyudmila, even though he does not publicly speak about his children, perhaps for their own protection. The daughters are named Maria and Katerina. Maria was born in Leningrad and Katerina (sometimes referred to as Yekaterina) in Germany when her father was stationed there with the KGB, AS reported.

The second daughter appears to be named for Lyudmila’s mother, who is called Ekaterina Shkrebneva, according to Sobesednik, a Russian-language news site.

According to Biography.com, Vladimir Vladimirovich Putin was born St. Petersburg, Russia, on October 7, 1952. He lived in a “communal apartment,” and later obtained a law degree before becoming a KGB officer stationed largely in East Germany. He later entered politics, serving in lower positions for various political leaders.

GettyPutin and his then wife

It’s believed that Lyudmile has remarried. “Lyudmila is no longer Putin,” reads the headline on Sobesednik, a Russian-language news site.

The site reports that Lyudmila is very secretive and has been seen in public only a single time since her divorce from Putin, in 2014, “when she performed at the annual Gorky Literary Prize ceremony in a white blouse and a strict black suit” to give out an award. That’s a group run by Artur Ocheretny, who, the site says, previously “worked at the Art Show Center company, which organized various parties for United Russia, the ONF, Gazprom and Co. Including for TsRMK.”

The site traced land transfers and found one in the name of Lyudmila Ocheretnaya. Does this mean that Lyudmila is remarried to Ocheretny? This has never been confirmed. As a translation of Sobesednik reports: “But Arthur Ocheretny is not yet 38, while Lyudmila Ocheretnaya is 20 years older than him. It is quite possible that the change of surname was dictated by completely innocent considerations.”

However, the site notes that Artur Ocheretny did not respond to a written request asking whether he himself (or any of his family members) are connected with the former wife of the president in any personal relationship. And he did not refute speculation that he is married to Lyudmila nor explain why else she would now have his surname.

Putin Is Rumored to Have Children With Former Olympian Alina Kabaeva

Alina Kabaeva, a highly decorated Russian gymnast, has been linked to Putin since his divorce.

Kabaeva’s father is Marat Kabaev, “the leader of Tatarstan’s business community and a relay for Vladimir Putin in Central Asia,” according to Intelligence Online. He is a former athlete with dual citizenship in Uzbekistan and Russia, according to TransferMarket.

A now-deleted article reported that Marat Kabaev is a “Muslim Tatar.” He has a Facebook page, but it doesn’t contain any pictures of his daughter or any grandchildren.

According to a 2019 report in Open Media, the family of Kabaeva, then described as “chairwoman of the board of directors at the National Media Group,” owns property worth around $20 million, including six apartments, two houses, and land spanning “four regions.” That site says her mother’s name is Lyubov Kabaev.

Her mother once said, according to The Sun, “Can’t a sportswoman fall in love with a policeman? Even a president?”

After 2008 reports that she had Putin’s child, The Sun reports that Kabaeva’s former coach said, “When Alina finds the right time, she will say it herself. I’m just happy for her.” That story claimed that Putin’s son with Kabaeva is named Dmitry. But she told Russian Vogue in 2011, according to The Sun, “My sweet little nephew Arseny has joined my ever-expanding family in Moscow. Everyone, of course, thinks he is my son.” 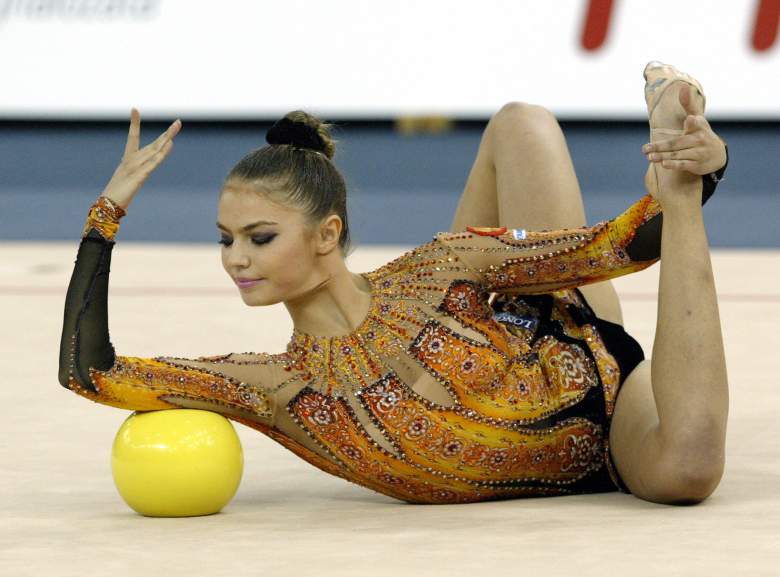 Kabaeva’s name is sometimes given as Alina Maratovna Kabayeva. A biography on sports reference.com, reports that she debuted “internationally at age 13” and “won her first world title (rope) in 1998. She upgraded to four golds and two silvers the following year in Osaka, including the overall and team titles.”

At the Olympics in Sydney, she placed third after dropping her hoop, but “she won a cart-load of medals at the European Championships in 2001 and 2002, and again brought home four world titles in 2003,” the site says. She “had also won world titles in 2001, but lost her medals when she was convicted of doping use at the 2001 Goodwill Games. She was not banned from competition as counterfeit medicine had been the cause of the conviction. Kabayeva fulfilled her goal and dominantly won the Olympic gold in Athens, retiring shortly afterwards.” In 2007, she came back to win the 2007 world title in gymnastics with the Russian team and was a torch bearer at the 2014 Sochi Opening Ceremony, the site reports.

According to the Sun, she wore what looked like a wedding ring in Sochi.

She then served “two years in the Public Chamber before being elected into the Duma, the lower house of Russian parliament…representing Vladimir Putin’s Yedinaya Rossiya party,” the site reports.

In 2019, the Sunday Times reported that the Kremlin “was silent” on reports that Putin and Kabaeva had twins together. That story reported that Kabaeva is considered by some to be Russian’s “secret first lady.”

After those reports, she was not heard from until 2021, according to Daily Mail, which reported, “Her last known public appearance was in October 2018, when she defended her doctorate at a university in St Petersburg.”

Daily Mail reported that she released a statement to the Russian women’s gymnastics team in 2021, saying, “I am very glad that we have all returned to the life we used to have, with training, competitions, tournaments and the Olympic Games. I know that every one of you has worked and trained hard, and that now you are ready and set to win for your country, for those who support you….”

Daily Mail reported that Kabaeva has given cryptic statements over the years, once saying she was with a man “I love very much” and “Sometimes you feel so happy that you even feel scared.” But she didn’t name him.

In 2020, Daily Mail reported that Putin was rumored to also have “a secret love child with a former cleaner” named Svetlana Krivonogikh. The daughter was Elizaveta, 17, but this relationship has never been confirmed.

READ NEXT: Chris Harrison’s Gushing Love Notes to His Girlfriend.

Loading more stories
wpDiscuz
0
0
Would love your thoughts, please comment.x
()
x
| Reply
Does Vladimir Putin have a wife and girlfriend? Is he married?