Adrian Peterson has been indicted on child abuse charges in Texas, according to numerous reports. Just hours before the news broke, Peterson posted on Twitter a meme that featured the words “Weapons may form but won’t prosper! God has you covered don’t stress or worry.” Peterson hasadmitted to the whooping, and said he would never “eliminate whooping my kids . . . because I know how being spanked has helped me in my life.”

My Fox Houston reports that the charges are for “reckless or negligent injury to a child.” NFL reporter Ian Rapoport tweeted that Peterson was seen “disciplining” a child, 4, with a “switch.” The boy had multiple wounds from the “disciplining” including bruises on his back and buttocks and lacerations on his thighs. According to CBS Houston, the boy’s scrotum was also injured.

This picture of Adrian Peterson's son from the Houston PD is not consistent with switch-whoopings I'm familiar with. pic.twitter.com/ZuIUt6vEeR

The charges stem from May and involve a boy from Minnesota who was visiting Peterson’s home in Texas. When the boy returned home, his mother took him to the doctor where the boy talked about the injuries he suffered, according to TMZ. The doctor referred to the wound as “child abuse.”

There seemed be no sign of any of this coming at practice or in the locker room earlier today. I saw Adrian Peterson laughing and joking.

The child is believed to be Peterson’s son. CBS Minnesota reports that Peterson beat him with a branch from a tree. After the beating, Peterson texted the boy’s mother to say that she would be “mad at me about his leg. I got kinda good wit the tail end of the switch.” He texted her again, saying:

Never do I go overboard! But all my kids will know, hey daddy has the biggie heart but don’t play no games when it comes to acting right.

He didn’t practice on September 11 due to a scheduled veteran’s day but did train on Friday September 12, reports ESPN. The Vikings will play the Patriots in Minnesota on September 14. He has been deactivated for the game.

Adrian Peterson has been informed that he was indicted by a grand jury in Montgomery County, Texas for Injury to a Child. The charged conduct involves using a switch to spank his son. This indictment follows Adrian’s full cooperation with authorities who have been looking into this matter. Adrian is a loving father who used his judgment as a parent to discipline his son. He used the same kind of discipline with his child that he experienced as a child growing up in east Texas.

Adrian has never hidden from what happened. He has cooperated fully with authorities and voluntarily testified before the grand jury for several hours. Adrian will address the charges with the same respect and responsiveness he has brought to this inquiry from its beginning. It is important to remember that Adrian never intended to harm his son and deeply regrets the unintentional injury.

The Vikings also released a statement saying that they are still investigating the incident.

The charges come from Montgomery County, Texas. Peterson lives there, close to Houston, in the Grogan’s Point subdivision of Woodlands.

He’s a native of Palestine, Texas, in Anderson County. The two counties are some 115 miles from each other.

Peterson is a devout Christian, speaking about his faith he said:

Jesus Christ means the world to me. I’ve been through so many different situations through my childhood and now my adulthood…God just helped me get through them and made me stronger at a young age. [Through] all the adversity and hard times I’ve been through, God has always been present. I’ve always prayed to Him and asked Him to give me the strength to endure and to help others and to better understand whatever situation I deal with in my personal life. And He has always showed up! It brings hope and peace of mind knowing that God gave His only begotten Son for us.” Peterson also spoke of his faith in relation to his injury of a torn ACL and MCL by saying “…‘This is a blessing in disguise. I’ll come back stronger and better than I was before.’ What flashed in my mind was, ‘I can do all things through Christ who strengthens me,’…

5. He Got 75 Yards in the Vikings First Game of the Season

Peterson has played at the Vikings since joining the NFL in 2006. He’s a three-time All-Pro player, catching 208 passes for 1715 yards with five touchdowns. Peterson was a college star at Oklahoma. In the Vikings first game of the 2014/15 season, he got 75 yards in a 34-6 win over St. Louis. 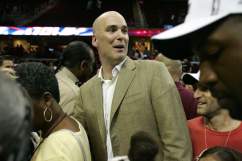 Danny Ferry’s Leave of Absence: 5 Facts You Need to Know