Hawks general manager Danny Ferry will take an indefinite leave of absence following comments he made on a conference call with owners about Heat forward Luol Deng.

1. The Leave Comes Amid a Ton of Infighting Among Hawks Owners

The announcement of Ferry’s leave of announcement comes less than a week after minority owner Bruce Levenson announced that he would sell his controlling interest in the team after self-reporting a racially insensitive email that he sent in 2012.

Several of the Hawks’ other minority owners, including Michael Gearon and CEO Steve Koonin, have been at odds with Levenson and had urged him to sell his stake in the team.

The other Hawks owners had launched an internal investigation into how the team handled race relations after Gearon heard Ferry’s comments.

This afternoon, Danny Ferry requested, and I have approved, taking an indefinite leave of absence, effective immediately. This has been an incredibly difficult time for him and his family and it is my hope that this time away from the Hawks organization allows him the privacy he needs to listen to the community, to learn about his mistakes, and to begin the long process of personal healing. As a human being, manager and friend, I wish him well as he undergoes this process.

And more from Koonin about the ownership struggle:

While the issues related to race are deeply troubling, at the heart of this dispute is an unfortunate disagreement amongst owners. That said, we have taken several steps to address what we can do as an organization to be better and stronger, including working with a diversity consultant to examine us and to train us to ensure something like this never happens again, we are committed to hiring a Chief Diversity Officer, and we have and will continue to meet with community leaders in an ongoing way to ensure our values reflect the community in which we play and work. The process of selling the team, which is to remain in Atlanta, is already underway.

In a letter to Levenson dated June 12, Gearon said Ferry’s comments were worse than those made by embattled former Clippers owner Donald Sterling and demanded that he be fired or asked to resign.

We are appalled that anyone would make such a racist slur under any circumstance, much less the GM of an NBA franchise on a major conference call. One of us can be heard on the tape reacting with astonishment. Our franchise has had a long history of racial diversity and inclusion that reflect the makeup of our great city. Ferry’s comments were so far out of bounds that we are concerned that he has put the entire franchise in jeopardy.

3. Ferry Said on a Call That Luol Deng ‘Has Some African in Him’

According to USA Today, during a Hawks conference call to formulate a strategy for the free-agent signing period, Ferry, reading from a player profile compiled from notes from scouts, said Deng “is still a young guy overall. He is a good guy overall. But he is not perfect. He’s got some African in him and I don’t say that in a bad way.”

4. The Comments About Deng Appear to Have Come From a Cavs Scouting Report

The Luol Deng “African” comment appears to have come from a Cavaliers executive. http://t.co/5gxX1MWFq4 pic.twitter.com/5FqQOZVmPZ

You can read the scouting report here.

SB Nation notes that the “African” comments actually appear to have been written by a Cleveland Cavaliers executive. 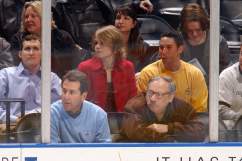