The Elimination Chamber’s going to play double duty this evening.

Seven of Raw’s top contender’s will fight for the right to face Brock Lesnar for the Universal Championship at ‘Mania 34. Three Superstars will start competing in the ring, which will eventually give way to more entrants entering the bout as their cells open. The all-star lineup for this bout includes Braun Strowman, Elias, Finn Bálor, John Cena, Roman Reigns, Seth Rollins, and The Miz. The Raw Women’s roster will also compete in the first-ever Elimination Chamber match. Raw Women’s Champion Alexa Bliss will attempt to hold onto her title as she faces Bayley, Mandy Rose, Mickie James, Sasha Banks and Sonya Deville. And as you all know, “Rowdy” Ronda Rousey is set to sign her WWE contract live during this stacked show.

For a complete breakdown of Elimination Chamber’s match winners and highlights, you’ve come to the right place. 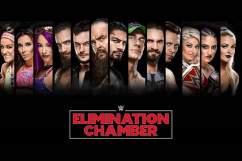 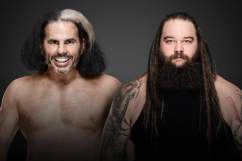 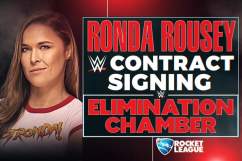 Luke Gallows and Karl Anderson vs. The Miztourage (Bo Dallas and Curtis Axel)

Highlights: Anderson and Axel decided to get this tag team bout underway. Both men engaged in some lockup exchanges that saw Axel dominate at first. Axel got a little more physical with some strikes, but Anderson ended up taking him down with a jumping calf kick afterwards. Once Gallows got into the ring, he assaulted Axel and made sure to label him a nerd all the while. Anderson made his way back in, but was clipped by Axel and fed to a fresh Bo. Bo and Axel went back and forth on offense as Anderson did his best to survive. Eventually, Anderson clocked Axel with his patented jumping karate kick. While Anderson stood atop the rope, Bo tripped him up and saved Axel from any further harm. Bo and Axel then took total control of Anderson with a series of tag team maneuvers and solo ring work. Anderson took a ton of punishment, but he saved himself later on after grounding both men with a backdrop suplex and a running single-leg dropkick. After giving the fresh tag to Gallows, Gallows ran in like a house of fire and took down The Miztourage. Gallows and Anderson did some nice teamwork for a while, but Bo and Axel cut Anderson off at one point. As the match got even more heated, Bo and Axel found themselves taken down. Gallows and Anderson followed that up with a Magic Killer, which led to them nabbing the victory. Afterwards, The Revival were heard backstage giving their disparaging commentary about Gallows and Anderson’s tag team work.

Highlights: Before the bell even rang, Cesaro and Sheamus jumped all over Apollo and Titus. But Apollo saved himself by clotheslining the tag team champs and sending them to the outside. Once the match officially began, Apollo planted Cesaro with a top rope splash. Apollo’s early dominating run got cut short after he got clocked by Sheamus on the outside. Cesaro and Sheamus then focused on keeping Apollo in their ring corner. Apollo fond himself getting stiff strikes and countless tag team maneuvers from “The Bar” while Titus looked on. Sheamus locked Apollo into a tight headlock and cut him off from tagging Titus in. Sheamus decided to knock Titus off the ring apron, but Apollo eventually took Sheamus down. After Titus got back up to his corner, Apollo tagged him in. Titus used his powerful offense to tear into Cesaro and Sheamus. Titus remained in control for a while and even landed his Clash of the Titus on Sheamus. Apollo ended up getting tagged back in and cleared the top rope as he flipped right onto Cesaro and Sheamus. Apollo’s standing Moonsault got countered, but his Enzuguri ended up landing soon after. It was all for naught though as Cesaro and Sheamus used their assisted White Noise maneuver to finish off Apollo.

Highlights: The start to this match was pretty trippy as Bray suddenly appeared in the ring after matt’s entrance concluded. But Matt wasn’t there to meet him. Bray paced around the ring while Matt taunted him with a verbal tirade. While Bray looked for him underneath the ring, Matt came from behind and struck down his strange rival. Matt remained in control for a few moments and even applauded Bray when he entered into his creepy stance. Matt then planted Bray with a DDT. Bray looked to be in dire straits until he planted Matt with a running body splash. Bray then took control of the match for several minutes afterwards. While both men continued to rage on on the outside, Bray cleaned Matt’s clock with a nasty Lariat. Bray gave Matt another won for good measure once the match returned to the ring. Bray looked to stay in control, but he was cut off with a boot to the face and a follow-up Tornado DDT. Matt then launched into his well of “Deletion” comeback maneuvers and got the better of Bray. Bray made sure to give himself another fighting chance when he countered Matt by landing a Uranage Slam and then using a Senton Splash. Matt dodged a top rope maneuver from Bray, but Bray quickly recovered and almost ended things with a Sister Abigail. But Matt became even more soon after “awoken” and “deleted” Bray with a quick Twist of Fate.

Asuka vs. Nia Jax (If Nia Wins, She’ll be Added to the WWE Raw Women’s Championship Match at WrestleMania 34)

Highlights: Things started off hot between both ladies as they laid into each other with numerous strikes. Nia used her power advantage to fling Asuka across the ring, but she soon got taken over the top rope after Asuka dodged her running tackle. Asuka looked to used her rear end strike to knock Nia down, but Nia dodged her and shoved her face right into the mat. Nia then crushed Asuka with an elbow drop and blocked all of Asuka’s submission attempts. Asuka soon found herself locked into a Torture Rack, but she quickly escaped and locked in a Guillotine Chokehold. Nia looked to be in trouble, but she soon saved herself by suplexing Asuka hard into the mat. Once both women got back to their feet, Asuka right right into the massive arms of Nia and got planted with a Samoan Suplex. Asuka almost got smashed wit ha Running Leg Drop, but she dodged it and responded with a sliding kick strike to Nia. Asuka then laid in some nasty kicks to Nia soon after. Later on, both ladies found themselves on the top rope. Nia tried using a Banzai Drop to finish off Asuka, but Asuka dodged her big move attempt at the last minute. Nia managed to get back up and splash right onto Asuka’s legs, but Asuka quickly recovered and locked Nia into an Armbar. Asuka’s submission attempt soon failed as she got Powerbombed into the ring corner. Nia tried following that up with another Powerbomb, but Asuka used her quick wits to roll her up and secure her win. After the match concluded, Nia punished Asuka some more by tackling her right into the timekeeper’s area. Alexa Bliss then gave her thoughts on her supposed ‘Mania 34 challenger as Asuka got helped back to her feet.

Pages: 1 2 3
Read More
John Cena, Pro Wrestling, Roman Reigns, Ronda Rousey, Wrestling, WWE, WWE Raw
Ronda Rousey will sign her WWE contract at Elimination Chamber 2018. Along with that huge event, be sure to check here to get all the PPV's results.