Braun Strowman vs. Elias vs. Finn Bálor vs. John Cena vs. Roman Reigns vs. Seth Rollins vs. The Miz (Elimination Chamber Match for a WWE Universal Championship Match at WrestleMania 34)

Highlights: The crowd was immediately given the chance to walk with Elias as he appeared in the ring on his trusty stool with a song to sing. After his performance got interrupted by Strowman and everyone made their walk down to the chamber, the first three competitors started things off – The Miz, Seth Rollins, and Finn Bálor. Once the match finally kicked off, all three combatants circled each other. The Miz made it clear that he wanted to form an alliance with Rollins to take down Finn. But when that attempt failed, Miz made that same offer to Finn and even put up the “2 Sweet!” hand sign to gain favor with him. Finn declined his offer and chose to partner up with Rollins and send Miz to the outside. Then Finn and Rollins fought in the ring and exchanged several holds with each other. Finn ended up putting down Rollins with a dropkick, but then Miz took the opportunity to try and flip over Finn to grab a pin. He paid for that mistake by eating a dropkick. Finn then began getting the better of his two in-ring foes with chest chops and assorted strikes. Rollins finally took Finn down with a knee to the gut, but he ended up getting into a pinning war with him and Miz soon after. Rollins escaped the pinfalls he got locked into and landed a unique backbreaker on Finn, which was followed up by a Suplex/Falcon Arrow combination on Miz. Rollins remained in the driver’s seat when he then landed a double Blockbuster on both men.

While Rollins stood in the middle of the ring, Cena arrived as the next Elimination Chamber entrant. As the crowd made it clear who they sided with, Rollins and Cena got into a shoving war. Cena entered into his signature comeback offense, which almost got cut off at several points. But Cena ended up taking Rollins down and doing the same to Miz with a double Five Knuckle Shuffle. After Cena got done landing his move, Finn caught him off guard by landing a double foot stomp. Rollins woke back up just in time to land a Superkick on Finn and then went into a corner clotheslining spree. At one point, Cena put a stop to it and picked up Rollins and Finn for a double AA. Finn and Rollins flipped off of Cena’s back, which led right into Rollins landing an Enzuguri on Cena. Rollins then found himself getting planted into the mat with Miz’s patented Neckbreaker combination. All four men broke off and began fighting each other on the outside. Moments after that, Cena and Rollins landed dual Superplexes on Finn and Miz.

As all four Superstars lay wasted in the ring, Reigns made his way out to continue the bout. Reigns served a bunch of strikes to whoever was unlucky enough to stand in his way. While Reigns locked eyes with Rollins, Miz shoved him right into his former running mate and planted Reigns with a DDT. Miz then signaled to the crowd and asked them who he should kick. Miz ended up laying in the most kicks to Reigns, but his last kick missed. Reigns then entered into his comeback moveset and laid into Miz. Finn tried stopping him, but Rollins cut him off and ended up getting Finn caught by more of Reigns’ maneuvers. Finn got dropped with a Deadlift Powerbomb, plus Cena got a Samoan Slam and Miz ate a Sitdown Powerbomb. Roman signaled for the Superman Punch, but Strowman’s entrance put a stop to all of that. Strowman whipped Rollins into the chamber’s walls and then began beating up every other man in the ring. Miz kept his distance from the big man while he watched Strowman destroy the opposition. Strowman shocked the crowd by landing a double suplex on Cena and Rollins. After using Finn as a battering ram and slamming him into Reigns, Strowman began chasing after the IC Champion. Strowman caught up with Miz on top of one of the cell ceilings, smashed his face into the glass panel, and then flung him right onto everyone below them in the ring.

Strowman clubbed every man in the chest and walked around the ring anticipating Elias’ entrance. He chose to get rid of Miz by planting him with a devastating Running Powerslam. After Miz’s exit, Elias’ pod exit didn’t come to be as he chose to re-lock his door. A distracted Strowman then found himself getting battered by a huge Shield Powerbomb from the four men remaining in the ring. Strowman kicked out of the following pin, but he then got cut down by everyone’s finishing move. He continued kicking out of repeated pins, but a Coup de Grâce ended up incapacitating him outside the ring. After every man landed a signature move on each other, Elias finally left his cell to pick up the scraps. Elias used a top rope elbow drop to try and get rid of Rollins, but his efforts were unsuccessful. Elias ended up targeting Reigns and planting him with Spinning Sitdown Powerbomb. Elias tried to land the same move on Strowman, but “The Monster’s” heavy statue proved to be too much for him. Strowman then took his chance to eliminate Elias with a Running Powerslam.

Strowman looked to land that same move on Reigns, but Rollins cut him off with a springboard knee strike. It didn’t seem to phase him too badly as he quickly shook off the damage done to him and soon eliminated Cena with a Running Powerslam. The final four then came down to Strowman, Finn, Reigns, and Rollins. Strowman laid out both Rollins and Reigns, but Finn managed to stay alive by landing quick strikes on him. Finn then landed a Coup de Grâce to Strowman’s back, but it still wasn’t enough to end Strowman’s mean streak. Finn and Rollins then clocked each other with Pele kicks, but Finn got the better of the exchange by landing his 1916 maneuver. Finn remained in control for a few moments, but he soon ended up in the arms of Strowman once more. Finn then got put out of the match with a Running Powerslam. Rollins and Reigns got to their feet and stared down their massive threat. Both Shield members chose to unite and lay in some stiff strikes to the big man. Strowman got slammed into the chamber’s walls for a bit by both men, but then Rollins turned on Reigns and tried to get rid of him. Rollins landed his corner turnbuckle Powerbomb on Reigns, but Reigns woke back up in time to land a Superman Punch. Rollins soon found himself fending off Strowman while he climbed onto one of the cell’s. Reigns arrived just in time to land a Samoan Drop on Strowman, which was followed up by big Frog Splash from Rollins. However, Strowman still didn’t stay down long enough to get eliminated!

Strowman shoved Reigns to the outside and got clipped with several Rollins Superkicks, but he shook off all the damage dealt to him and eliminated Rollins with his patented finisher. Strowman and Reigns then began their epic brawl to see who would face Brock Lesnar at ‘Mania 34. Strowman got in a few licks on Reigns, but then Reigns splashed Strowman into the chamber’s fencing. Reigns then forced Strowman to slam himself through one of the pods’ glass walls. Afterwards, Reigns weakened Strowman with several Superman Punches and finally vanquished the “Monster Among Men” with a final Spear! During Reigns’ post-match celebration, Strowman chose to plant him with two Running Powerslam’s! Then Strowman ended the evening by sending Reigns through one of the pods while the crowd roared on in approval.

Come back and join us for the results & highlights from WWE Fastlane on March 11, 2018! 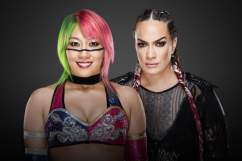 Pages: 1 2 3
Read More
John Cena, Pro Wrestling, Roman Reigns, Ronda Rousey, Wrestling, WWE, WWE Raw
Ronda Rousey will sign her WWE contract at Elimination Chamber 2018. Along with that huge event, be sure to check here to get all the PPV's results.