Trevor Lawrence’s parents, Amanda and Jeremy Lawrence, have been cheering on their son as he leads Clemson in the national championship game against Alabama.

The Lawrence family hails from Cartersville, Georgia, and comprises of Amanda, Jeremy, their two sons, Trevor and Chase, and their youngest daughter, Olivia. Chase is the oldest in the family, then there’s Trevor (five years younger than Chase), and Olivia (11 years younger than Lawrence).

Ever since Lawrence’s lookalike, Bella Martina, rose to fame, many have wondered if she is her sister. But there’s no relation between Martina and Lawrence. His real sister, Olivia, is much younger than Martina. Fans can often see Lawrence’s longtime girlfriend, Marissa Mowry, standing with his family at games as well.

Here’s what you need to know about Lawrence’s mother and father, Amanda and Jeremy Lawrence:

Wanted to give a shoutout to my big brother for graduating today! Congrats brotha ?

Like his brother, Chase has long hair, down to his waist in some photos.

Lawrence’s seven-year-old sister, Olivia, is featured in many of his Instagram photos as well. To The Post & Courier, Amanda Lawrence said Lawrence was protective of his little sister.

She said further, “This is what we’ve always told Trevor even before he got really well-known: You’ve got to know who you are. If you didn’t have all these people telling you how great you are, you’ve got to still know that you’re still worthy, you’re worth somebody and you’re a child of God.”

2. Amanda & Jeremy Lawrence Are Devoutly Religious, According to Their Local Pastor

Had a great senior night thanks to some amazing people! . Blessed to be somewhere as great as Cartersville, definitely going to miss this place when I'm gone next year.

Don Hattaway, a pastor for Tabernacle Baptist Church in Cartersville, Georgia, told Independent Mail that that Lawrence family have been devout attendees of his church for the 16 years that he’s been working there.

Of Lawrence, Hattaway said, “Trevor’s always been very polite, hard-working — he excels at everything he does. Always very respectful.”

Hattaway continued, “I’m not at all surprised at his success on the field; he has certainly the physical ability and the mental aptitude to be an incredible leader. Beyond that, I think his character is more inspiring to me. It’s not just what he does on the field, it’s how he carries himself. I know he has a concern for people; he always takes time to speak to people, even little kids.”

3. Lawrence’s Mother, Amanda, Says Her Son Has an ‘Unusual Calmness’

Pictured: Lawrence with his mother, Amanda.

To The Post & Courier, Amanda Lawrence explained what she believed was one of her son’s greatest attributes: his ability to stay calm in stressful situations.

She said, “Trev really has an uncanny just calmness about him. Even in the midst of very intense circumstances or situations, Trevor’s got a pretty level head and he’s been able to handle that. My husband is really like that too. He probably gets that from his dad. He’s just calm, cool and collected.”

Happy Mother's Day to the best woman I know, thanks for being who you are ?

To Sports Illustrated, Amanda said of her son that he was a “wild man” growing up, and often would run away from his parents into oncoming traffic. He was almost hit by a car when he was three years old, she said to the publication, and when he was seven years old he ripped his nostril from his face when he was making a tackle in their backyard.

She also noted that his hair was not always as flowy and luscious as it is now. It was a buzzcut when he was in eighth grade, she said. “It kind of just blew up,” she explained. “He never intended it to be his trademark.”

Amanda noted an additional, slightly bizarre aspect of his adolescence in a 2019 interview with ESPN: that he was signing autographs as early as when he was in eighth grade.

4. Lawrence’s Father, Jeremy, Hired a Quarterback Trainer to Work With Lawrence in the Eighth Grade 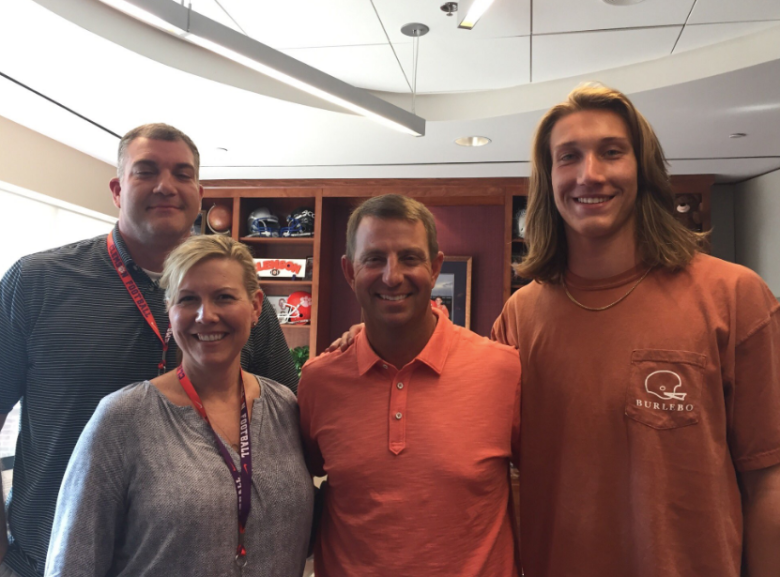 According to an ESPN profile of Lawrence, his family was investing in his football career from a very early age. By the eighth grade, his parents had paid a quarterback trainer to work with Lawrence in his off-season. It seems like this gamble paid off: the sports publication reveals that Clemson recruiting coordinators were regularly attending Lawrence’s games by the time he hit ninth grade.

Lawrence’s parents have spoken little about what it’s like to see their son become so famous. His girlfriend has, though. Mowry told ESPN that it can be difficult, at times, for them to go on dates in their favorite watering holes now. She said, “Soon, we won’t be able to do $3 bowling whenever we want.”

Lawrence was present for that interview, and replied to her, “[It’ll be] because of inflation.”

5. Jeremy Lawrence Gave His Son the Gift of Height; He’s 6’7

According to Sports Illustrated, Jeremy Lawrence gave his son some good genes when it came to height. He stands tall at 6’7; Lawrence is 6’5. The publication did not note how tall Amanda Lawrence is.

Read More
5 Fast Facts, Clemson, Football, Sports
Trevor Lawrence's parents are Amanda and Jeremy Lawrence. He also has a brother and a sister. His mother and father have given several interviews.