The offensive line of the Chicago Bears is one of their biggest question marks heading into the 2020 season. It was an area the Bears needed to address this offseason, and they did, sort of, by adding former Seahawks guard Germain Ifedi, and drafting two seventh rounders who may or may not make the roster this year.

After signing backup safety Marqui Christian this week, the Bears should have $15-16 million in cap space to play with. While it wouldn’t behoove them to blow all that money this year, they could still make one more potentially high impact signing — and it might be a good idea for them to take a good look at another former Seattle Seahawk.

Veteran offensive lineman Justin Britt may not be available right at the start of the season, but he could provide some much-needed depth on the interior of the offensive line if he passes his physicals and looks 100 percent healthy.

Justin Britt: Started 15+ Games Every Season Other Than 2019 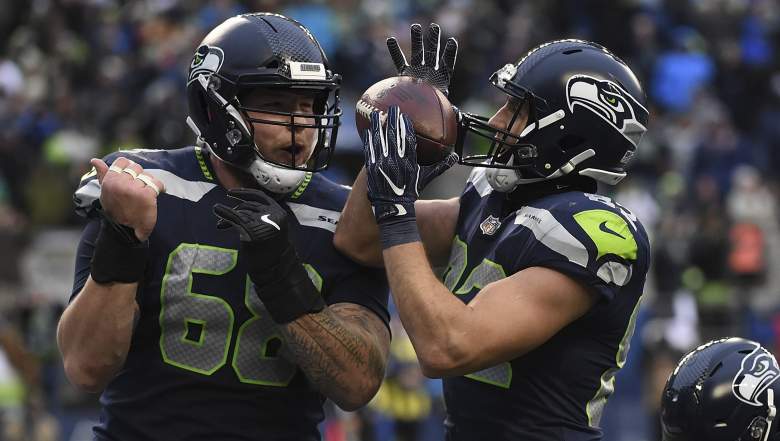 GettyJustin Britt was cut by the Seahawks to free up cap space.

Britt tore his ACL Week 8 against the Falcons last season and he missed the final eight games. A six-year veteran, the Seahawks cut him largely to free up cap space. He started all but one game in the five years up until his knee injury last year. He was reliable and durable in his time with Seattle, and while the timetable on his return is still up in the air, Britt was said to be “making very good progress” on his rehabilitation after ACL surgery this past February.

His health is of paramount importance, of course; the Bears certainly wouldn’t — and shouldn’t — sign him if he doesn’t look good physically. But considering his injury will likely come with a cheap price tag, coupled with their current need for depth on offensive line, he could be worth taking a chance on if and when he’s ready to go.

Britt played center for the last three years, but he has also played left guard and right tackle, logging a full season at each position. If something should happen to current center Cody Whitehair, third-year lineman James Daniels would be the team’s only other option, and he has struggled at the position before. Britt can capably play multiple positions, and would be the best kind of insurance for Juan Castillo’s o-line.

The coronavirus pandemic has to play a factor in the team’s line of thinking, as well. If the league is going to try to play a full 16-game season without pause until February, every team will need as much depth as they can get. If the season is shortened or truncated somehow, Britt may not be worth it. Still, he’s an intriguing option who, if healthy, could be a nice piece to add.

READ NEXT: Bears to Tryout Undrafted QB Who Worked Out With Drew Brees: [Report]