Tyler Bray fans are collectively holding their breath right now. According to Bears‘ beat writer and analyst Daniel Greenberg, Chicago is reportedly hosting a visit with quarterback Mason Fine this weekend. Fine spent four years as the signal-caller at North Texas, and he went undrafted in this year’s draft. Greenberg tweeted that Fine’s high school mentor confirmed the upcoming visit.

QB Mason Fine is flying to Chicago this weekend for a tryout with the Bears, per his former high school mentor.

Fine played college football at the University of North Texas and finished as the program's all-time leader in passing yards (12,505), and passing touchdowns (93).

Nicholas Moreano of the Chicago Audible confirmed Greenberg’s report, adding Fine will take a COVID-19 test Sunday before quarantining for two days and trying out next Wednesday.

Just spoke with Pawhuska High School head coach Matt Hennessy, and he confirmed that QB Mason Fine is flying out on Sunday for a tryout with the #Bears that will take place on Wednesday. Fine will take a COVID test on Sunday and quarantine for two days.

At 5’11” and 190 pounds, Fine is a bit undersized, but he could be a decent developmental project, especially if he outshines current Bears’ third-stringer Tyler Bray.

Fine threw for 3,088 yards, 29 touchdowns and nine interceptions last season, which was actually a bit down from his production in the previous two seasons. He passed for 4,052 yards and 31 scores his sophomore year, and 3,793 yards and 27 touchdowns the year after that. He was consistently productive throughout college, winning back-to-back CUSA Offensive Player of the Year awards. He’ll likely compete with Bray for a spot on the Bears’ practice squad.

Fine missed a little time his senior year after suffering a concussion, but he has no major red flags injury-wise that should concern the Bears. The New Orleans Saints and San Francisco 49ers had reportedly met with Fine after the draft, but no deals were made. We’ll see how he takes to the Windy City. 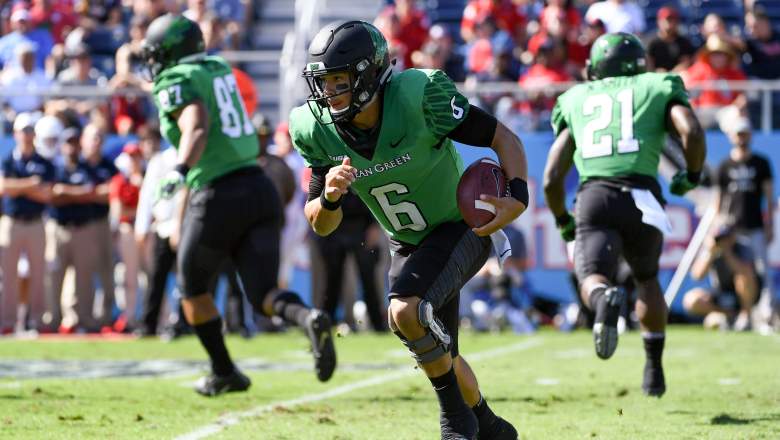 Fine’s accuracy is one of his more intriguing intangibles. He completed over 62 percent of his passes over his collegiate career, and his decision-making is solid.

UNT's Mason Fine drops a dime to WR Jalen Guyton who breaks three Blazer defenders on his way to the endzone! pic.twitter.com/4iAxQX6dbg

Fine is a gifted athlete, and he’s also crafty in the pocket. Check out this flea-flicker from last season:

He can also take a hit and still deliver:

Taking it back to 2017 when Mason Fine capped off a 98 yard drive with this game winning TD to Rico Bussey Jr. Somebody sign this man! #ThrowbackThursday pic.twitter.com/4wkwLufgPu

Another intriguing thing about Fine? He worked out with Drew Brees this offseason before his time in quarantine, per NFL insider Tom Pelissero.

North Texas QB Mason Fine — who threw for over 12,000 yards and accounted for 100 TDs with the Mean Green — had video interviews last week with several teams, including the #Saints. Before the lockdown, Fine was working out with trainer Todd Durkin … and Drew Brees. 🤔 pic.twitter.com/vB9dMHr5ry

While Fine has a good arm, he’s by no means a dual-threat kind of quarterback. He has never ran for more than 1is ran for seven touchdowns in his four seasons with the Mean Green, and his yards-per-carry was a paltry 0.2 yards over his career, which won’t strike fear into the hearts of any defense. Still, if the Bears see something in Fine they like and think they can work with, he could challenge perennial practice squad-er Bray, but he’ll be a long shot.

Bray has two years of experience in Matt Nagy’s system, and in one of the most unusual seasons in recent memory, a little experience will go a long way.

The Bears have not confirmed their reported meeting with Fine, so as of now, it’s only an unconfirmed rumor — but a very intriguing one.