Get Disney Plus Here

It’s the kind of world we used to dream of as children, full of fantastical creatures and mythical beasts and adventures that last a lifetime. Pixar’s Onward brings to life these magical lands of elves, manticores, and centaurs, though the magic has been replaced by technology. Following young Ian Lightfoot, Onward takes viewers on an incredible journey to rediscover something lost from their past. It’s a touching coming of age story that puts an emphasis on companionship and the sacrifices we must make to better ourselves.

Penned by Dan Scanlon, Jason Headley, and Keith Bunin, Onward, like so many of Pixar’s movies, teaches its young viewers an important lesson on growing up. Intermingled within the magic and awe of the world it takes place in is a touching tale made even more relatable thanks to the vocal talents of Tom Holland, Chris Pratt, Julia Louis-Dreyfus, and Octavia Spencer.

How to Stream ‘Onward’ – Exclusively on Disney+

You can stream Onward and hundreds of other movies and shows on your computer, phone, tablet, smart TV or streaming device. The service costs $6.99/month. You may also opt for this discount bundle of Disney+, Hulu and ESPN+ for $12.99/month.

When a spell to see their deceased father fails, two elven brothers embark on a journey for a second chance.

Those of you who were waiting to see Disney and Pixar’s Onward until it left theaters and hit streaming services have something to be excited about this morning, as Disney has announced that Onward will hit Disney+ on April 3rd in the U.S.—much earlier than originally anticipated.

The film will first become available on Disney+ today.

Of course, Disney is making this move in response to the current circumstances surrounding the COVID-19 pandemic, which has caused thousands of movie theaters around the nation to temporarily shutter to avoid the spreading of the virus.

How Long Is ‘Onward’? 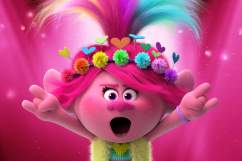 On his 16th birthday, teenaged elf Ian Lightfoot is given the opportunity to see his deceased father, Wilden, with a “visitation spell.” When it fails and only produces Wilden’s lower half, Ian and his brother, Barley, travel to locate the Phoenix Gem needed to complete the spell. Their quest takes them across a world full of mythical creatures and puzzles to locate the gem needed to complete the “visitation spell” and see Wilden one last time.

“Onward” is full of top-notch talent, who, like every role they’ve held before, help to bring a certain charm to the movie.

The 16 year old son of Laurel and brother to Barley. Ian shows promise with casting spells, which became obsolete due to advancements in technology. Having never met his father, he receives the opportunity to finally do so on his 16th birthday.

Ian’s older brother, Barley is close to the 16 year old elf and serves as his mentor. Barley’s fearless nature comes from having missed his father’s last moments alive because he was afraid. Barley provides the duo their ride for their quest, his van Guinevere.

The matriarch and widow of the Lightfoot family, Laurel is caring and warm to her sons. With the help of her boyfriend, Colt Bronco, Laurel tries to find the boys after they leave to locate the gem for the “visitation spell.”

The manticore owner of a local restaurant. Corey is dragged into Ian and Barley’s quest when they approach her in search of the Phoenix Gem. She plays an integral role in helping Ian and Barley reunite with their father.

Canadian composers Mychael and Jeff Danna stepped in to provide the wondrous score for “Onward” Joining them on the official soundtrack are Grammy award winning singer-songwriter Brandi Carlile, who provided the lyrical song “Carried Me With You,” which she co-wrote with Phil and Tim Hanseroth. The soundtrack didn’t make waves when it released, but it serves as the perfect accompaniment to the film’s adventures.

‘Onward’ at the Box Office

Made with a budget of up to $200 million, “Onward” had a complicated time at the box office. It took in only $104 million, but its poor numbers were attributed to the coronavirus pandemic that hit in late-February. To compensate for movie theater closures, “Onward” was released digitally only two weeks after its official theatrical release.

‘Onward’ Reviews – What the Critics Said

It may not have earned the same praise as some other Pixar movies, but “Onward” held its own critically. Critics lauded the film’s animation and premise but were primarily unimpressed with how well it fleshed the story out. Coming out on the heels of “Coco,” “Onward’s” portrayal of and attitude toward death was considered underplayed.

Where ‘Onward’ Fits in the Disney Movie Pantheon

“Onward” has yet to solidify itself as one of Pixar’s greatest, but the animation style and star-studded cast are sure to help elevate it to a fan favorite. Though its release was made complicated by the state of the world, it will surely be remembered as a movie that helped families get through a more difficult time. Its use of fantasy, mythical creatures, and magic will surely inspire the imagination of children for years to come.

Get Disney Plus Here

“Onward” offered plenty of thrills as the Lightfoot brothers embark on their epic journey. Behind the scenes, there are many intriguing tidbits that unfolded during the film’s production. Here are five fast facts to enjoy before streaming “Onward.”

Pixar loves its cameos and references. In “Onward,” “Brave” plays a background role in a few scenes, such as the Will O’ the Wisps forest depicted on Ian’s calendar. The Brave Wilderness on the map given to Ian and Barley also references the same film. Pizza Planet is a popular reference in most Pixar movies, and in “Onward” it makes another appearance. This time as Pizza Realm.

Well-known actor and former “Cheers” alumni John Ratzenberger has made a small side job out of appearing in Pixar movies. When he does lend his vocal talents, though, it’s generally for the same role. In “Onward,” Ratzenberger depicts a cyclops construction worker. He also lent his voice to “Up” and “Inside Out,” both of which for a construction worker.

Tattoo artist Sweet Cecily Daniher filed a lawsuit against Pixar, Disney, and the film’s producer, Kori Rae, feeling that the production stole her art. During a 2018 festival, Pixar rented a decorated fan owned by Daniher. The artist claims that the design on the in-movie van, Guinevere, was stolen from the van rented for the festival. As of February 2020, the suit was pending, but Daniher was calling for distribution to cease.

Pixar is always bringing together stars that have a history of working together. For instance, Tom Holland and Chris Pratt are coming off of their recent interaction in Marvel’s “Avengers: Infinity War” and “Avengers: Endgame.” Holland also recently worked with Octavia Spencer in “Doolittle,” who both provided the voices of animals alongside Robert Downey, Jr, who also starred in the “Avenger” series.

At only one year old, director/writer Dan Scanlon lost his father. He has said that the film is inspired by his experiences growing up without knowing who his father was. It parallels Ian Lightfoot’s own experience, who also didn’t get to know his father as he grew up to be a teenager. Just as Ian was given a gem to see his father, Scanlon was given an audio recording of his father when he was a teenager.

Read More
Disney, Disney Plus
Onward is coming to Disney+ MUCH earlier than anticipated.