ESPN’S 30 for 30 series takes on the life and times of former dual sports superstar Bo Jackson in You Don’t Know Bo.

How to Watch ‘You Don’t Know Bo’ Online

Every film in the complete 30 for 30 library, including You Don’t Know Bo, can be watched with a subscription to ESPN+.

Once signed up for ESPN+, you can watch You Don’t Know Bo on your computer via the ESPN website, or you can watch on your phone (iOS or Android), tablet, Roku, Fire TV Stick, Apple TV, Xbox One or other compatible streaming device via the ESPN app. 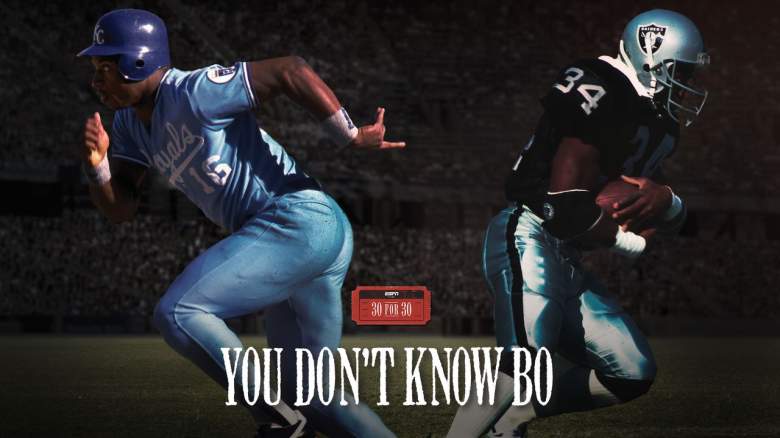 “There are stars and there are superstars. Then there’s Bo Jackson,” the film’s narrator begins in this 30 for 30 installment.

Directed by Michael Bonfiglio, the film looks at Jackson’s legacy from a unique perspective. Bonfiglio notes at the beginning of the film that he wanted to capture the sheer enormity of Jackson’s larger than life sports persona. “For a very brief period of time, Bo Jackson was one of the most famous people in the country, if not the world. He’s really the closest thing that we’ve seen to a real-life superhero,” Bonfiglio said. “And the things that he did, the way that he captured people’s imaginations and hearts really was like something out of fiction. I wanted everything in the film to reflect this legend of Bo, this superhero kind of an idea and for the film to be about the mythology surrounding Bo Jackson.” Mythology is exactly the right word, and the film highlights all of the other-worldly things that made Jackson such an icon.

Former coaches marvel about the time they watched Bo leap over a Volkswagon. Football players, basketball players, and media analysts alike take turns telling stories about how Jackson excelled at both sports in a way no one else has prior or since. Jackson’s first-ever at bat in the 1989 MLB All-Star game was a home run, and when the game’s commercials aired, another part of Jackson’s legend was born: his ad campaign.

As many segments of 30 for 30 do, You Don’t Know Bo delves deep into the cultural zeitgeist during the time Jackson became a two-sport sensation. Jackson became a pop culture icon in the late 1980s, and his “Bo Knows” ad campaign with Nike remains one of the most memorable sports gimmicks of all-time. His name was a part of the nation’s lexicon at the time, and the Nike ads were a primary reason why.

Jackson, who was an elite running back from Alabama, was the No. 1 overall pick in the 1986 NFL Draft. Coming out of Auburn University, Jackson was drafted by the Tampa Bay Buccaneers first overall, but he refused to play for them after an incident that caused him to miss his final baseball season at Auburn. Jackson had a visit with the Bucs prior to the draft and was told by Tampa Bay personnel that the visit was sanctioned by the NCAA.

Turns out that it wasn’t, and Jackson would not play for the Buccaneers after that, as he blamed the team for robbing him of his final baseball season at Auburn. “I sit there on that ground, and I cried like a baby,” Jackson revealed about missing his final college baseball season in one of the film’s more emotional moments.

Jackson chose instead to play baseball with the Kansas City Royals, who drafted him in the fourth round that year. What followed was one of the most unique and memorable sporting careers in history.

Jackson discusses growing up poor in Bessemer, Alabama, and details how he was a shy, quiet youth with a stuttering problem who eventually became an angry young man looking for conflict wherever he could find it. He eventually channeled his anger and frustration into sports, and his legend only grew from there.

Jackson Gives Details of His History in Both Football and Baseball

Jackson details how George Steinbrenner,  former owner of the New York Yankees, wanted to draft him, and offered him $250,000 to play for the Yankees out of high school, but Jackson, set on attending college, turned him down. Jackson also discusses two fateful conversations he had with two different college football coaches.

“The day Bear Bryant called my house, it was like God calling,” Jackson says in the film. Jackson reveals that had he attended the University of Alabama under Bryant, he would likely not have played until late in his sophomore year at the earliest. Thus, when Auburn head coach Pat Dye visited him and promised him ample opportunities to start as a freshman, Jackson headed to Auburn, where he won the Heisman in 1985 and later helped the Tigers defeat the Crimson Tide for the first time in nine years.

Jackson played with the Royals for five seasons (1986-1990) and the Los Angeles Raiders for four years (1987-1990), and in that time, he became one of the most popular athletes in any sport.

A freak hip injury in a 1991 game against the Cincinnati Bengals cut his career short. Jackson said he dislocated his hip and popped it back in as he rolled over. While he returned to baseball after the injury, he was never the same.

Perhaps Jackson’s time in the sports world is best described in this quote from the film: “All we saw was a man doing things that we had no idea were humanely possible. Then, out of nowhere, he was gone.”