The US Navy has just released footage of their new rail gun being tested. Seen in the video above, this new electromagnetic rail gun is seriously intimidating.

On the Navy’s YouTube page, officials write: “The EM Railgun is a long-range weapon that launches projectiles using electricity instead of chemical propellants and is under development by the Department of the Navy for use aboard ships.”

According to the Navy website, this high-octane rail gun is expected to be installed in a Navy vessel by 2016.

“The electromagnetic railgun represents an incredible new offensive capability for the U.S. Navy,” says Rear Adm. Bryant Fuller, the Navy’s chief engineer. “This capability will allow us to effectively counter a wide-range of threats at a relatively low cost, while keeping our ships and sailors safer by removing the need to carry as many high-explosive weapons.” 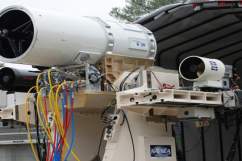