While Samsung has been taking potshots at Apple’s new iPhone in their recent Note 4 commercials, Samsung has yet to call out BlackBerry in an ad.

Here’s a spec breakdown for the BlackBerry Passport from the Daily Mail:

“The BlackBerry Passport has a full HD 4.5-inch square screen, which is said to offer a similar viewing space to a 5-inch phone, but ‘an even better viewing experience’ because of the screen’s width.

It has 1440×1440 pixel resolution display with a pixel density of 453PPI. Other specifications include a 2.2GHz quad-core Snapdragon 800 processor, 3GB of RAM and 32GB of storage plus expandable storage via microSD card up to 64GB. There is also a 13MP rear camera and a 2MP front camera.”

Want to get a closer look at the BlackBerry Passport? Check out the video review above from the Verge.

The Passport is designed to more easily view documents, spreadsheets and X-rays. It’s being marketed with a particular emphasis towards writers, medical professionals, and architects, who are expected to be especially interested in the squat, broad display’s potential for getting work done on the go. Despite its perks, it might not appeal to all users, since some popular apps aren’t designed for the BlackBerry platform. 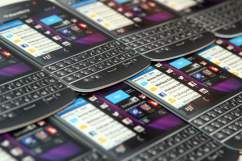 Curious about how the same publication viewed the Note 4? Check out the Verge’s hands-on video about the Samsung Galaxy Note 4 above.

As we explained in our specs & features guide for the Note 4, Samsung’s latest Note offering stands out because of its 2.7GHz Qualcomm Snapdragon 805 processor, an improvement from the 2.3GHz Snapdragon 800 in the Note 3. The Note 4’s other cool features include an improved camera for taking better selfies, and a battery that has been designed to have 7.5 percent less battery consumption.

More interested in the iPhone 6’s bigger cousin, the iPhone 6 Plus? Check out The Verge’s take on Apple’s first phablet in the video above.

In their full review of the iPhone 6, The Verge had both complimentary and critical things to note about Apple’s new phone. Overall, however, their assessment of the iPhone 6 was largely good, with the phone scoring a 9.0/10 in the review. The Verge wrote:

“Everything is better and nothing is different…Yet there’s nothing truly ambitious here, no grand vision of the future or of a new way of living in the present…The latest iPhones could have been a chance for Apple to really re-examine what smartphone hardware should be, but Apple just built a bigger iPhone. Because that’s what people wanted.

For a variety of reasons, from the camera to the app ecosystem to the hardware itself, the iPhone 6 is one of the best smartphones on the market. Maybe even the best. But it’s still an iPhone. The same thing Apple’s been making for seven years.”

While the security of iOS is usually considered a big plus for the iPhone line, a recent spate of issues with iOS 8 has made the iPhone 6 Plus a little bit unappealing. A fix is planned, but many iPhone 6 fans aren’t happy with iOS 8 right now. Combine that with photo evidence of the iPhone 6’s bending problem, and it’s no wonder some smartphone buyers are holding out for a BlackBerry Passport or Galaxy Note 4 instead.

Go hands-on with the Gear VR in the PC Mag video above. The Gear VR only works with the Note 4, so that gives gamers an extra incentive to choose the Note 4 over the BlackBerry Passport or iPhone 6 Plus.

Need more info before you make your decision? Check out our post that compares the Note 4 vs iPhone 6 Plus.

So, to sum up: If you’re a medical professional or business leader who works for a company that has a lot of BlackBerry integration already, the new BlackBerry Passport is probably perfect for you. If you prefer to use a stylus while you work and you want a device with lots of battery conservation options, try the Note 4. If you want a device with a secure ecosystem, a slightly smaller screen than the Note 4, and eventual Apple Watch support, the iPhone 6 Plus is your best bet.