After skipping a live event entirely for the conclusion of Fortnite Season 6, it looks Epic could be bringing them back for Season 7 if this new leak is anything to go off.

There’s a lot going on in Season 7 in terms of story and it’ll be hard to resolve all of it without an event of some sort. It would feel very strange just to see the giant UFO hovering over the island simply disappear without a trace.

We also have Dr. Slone to deal with, but she might be too busy with her DC Comics villains to focus on what’s going on in Fortnite. Even if she isn’t around, the aliens will have to be dealt with and a live event could be the way to do it.

Early look at the Event Countdown!! 🔥

There will of course be a timer at the front, but that's how it pretty much should look like In-Game!

(Big shoutout to @gameshed_ who made this awesome image in Blender!) pic.twitter.com/CAWyNPBBxC

Thanks to Fortnite leaker ShiinaBR and Gameshed, we have a look at what this timer would look like in the game. It’s expected that it would be showing in the lobby like previous countdown timers have.

Now, what it’ll be counting down to is another question entirely. We currently have no idea what Epic has in store for the rest of season outside of having to deal with the aliens in some way.

With Superman coming to the island in the near future, perhaps he could be the key to the season. While you might think it’s strange to see a character from outside of Fortnite save the day, keep in mind that this is what happened back in Season 4.

At the end of the day, your character was the one who saved everything, it wouldn’t have been possible without Marvel’s pantheon of heroes. Galactus was the last major villain we’ve seen in Fortnite, so hopefully somebody will be able to pick up the torch.

Do We Know Anything? 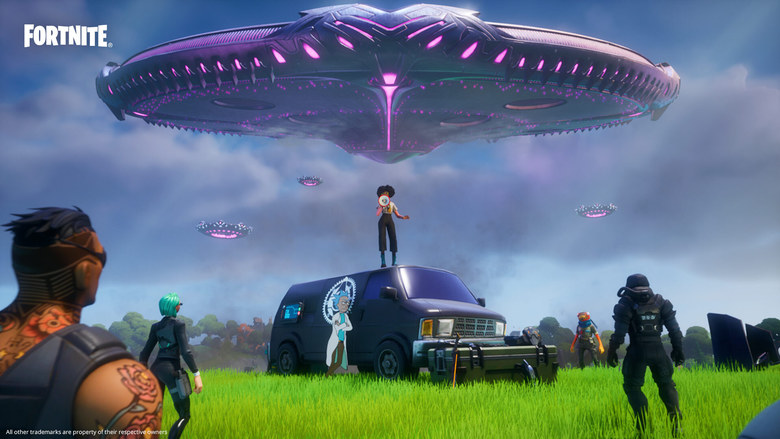 Unfortunately, despite the fact that the Mothership over the island does seem to be moving around, we don’t know what its intentions are.

The storyline has been moving along faster than it has in previous seasons, but we aren’t getting many reveals. Holly Hedges has transformed into Holly Hatchery and presumably, Coral Castle will be wiped out at some point.

While we thought Coral would be destroyed a while ago, it seems like that has now turned into the dangling carrot from Epic Games. Keep in mind that we’ve only had two major updates so far in the season, so there’s plenty of time for the developers to introduce some new things.

For right now, it’s looking like we’ll just have to wait for Coral Castle to get wiped up before we can progress the story further. It might have taken a bit longer than we would have liked, but we’ll just have to trust the process.

To their credit, Epic has created a fun season with some wacky items for players to mess around with. Even if you don’t play Fortnite for the story, you might enjoy it for the gameplay this season especially. In the meantime, we’ll just have to wait for the map changes.