The Man of Steel is finally in Fortnite, but he won’t just be handed out to players, but instead they’ll need to complete a series of tasks to get him.

For starters, Superman and his Black Suit variant will only be available to Battle Pass owners, so that will need to be purchased beforehand. If you’re a Fortnite Crew member, the Battle Pass was already given out to you, and if you’re not and don’t have the pass already, it would be an excellent value as of right now.

Once all of that is out of the way, all you’ll have to do is complete the quests once they are active. Luckily, if you’re here reading this, that means the quests are live. Here’s how to unlock Superman in Fortnite.

How to Get Superman 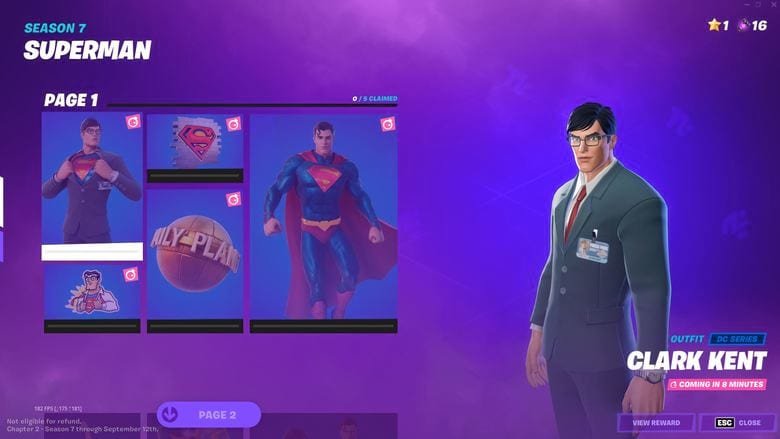 There are a bunch of cosmetics to unlock on top of Superman, so you’ll want to make sure you scroll over to the Superman tab in your Battle Pass to figure out exactly what you want to get first.

Unfortunately, you can’t just hop right into unlocking the Man of Steel, so you’ll need to target some of the lesser prizes first.

Unlocking things is quite simple as each cosmetic lays out specifically what you need to do to get it. Getting the Superman skin itself is a nice nod to the characters lore as all it requires is using a phone booth as Clark Kent. Here’s how everything shakes out:

You’ll need to do the very first quest listed in order to get the ball rolling, so make sure you track down those NPCs on the map.

Things like a Clark Kent and Superman logo emoji are available along with a Daily Planet Back Bling, so there’s no reason not to want it all. Fortunately, the Epic Quests you’ve completed before any of this released do count, so you don’t have to scramble to finish 84 of them before the season finishes from scratch.

The real meat of the deal comes in page two where you can find the Black Suit variant, his cape, a loading screen and even a Fortress of Solitude pickaxe. Complete 84 Epic Quests lets you don the Shadow style of Superman.

We’ve seen Fortnite come out with DC Comics-themed cosmetics before, but this particular character features some of the best looking stuff we’ve seen in Fortnite to date.

READ NEXT: Fortnite Post-Rift Tour Quests Give Out Even More Cosmetics