If you’re one of the people out there captivated by the hit show WandaVision and you’re also somebody who plays Fortnite, you might have noticed a bit of a connection between the two in the latest episode.

In episode 7 of WandaVision, there’s a commerical break that features Nexus pills. These commercials have always been a way of introducing easter eggs into the show that tie into the greater Marvel universe.

This particular tease actually ties Fortnite into the show because of Season 4. If you remember, the title of that season was the Nexus War.

As it turns out, Nexus means quite a bit here and it can have wide-ranging consequences for the Marvel universe, and perhaps maybe for Fortnite too.

What Does the Nexus Mean?

#WandaVision spoilers
–
–
–
–
–
–
The pathway for multiverses within phase 4 including #Spiderman3 is widening… pic.twitter.com/ELIyUdmS17

A Spider-Man 3 fan page showed that the Nexus can be a way of opening a pathway for a multiverse in the MCU, but its definition could also mean things for Fortnite.

You might not realize it, but everyone that happened in Fortnite Season 4 canonically happened in the Marvel Comics universe. While that might not mean a whole lot, the Marvel Fandom page says the Nexus is a pathway to any and all possible realities.

Been getting this question a lot. Yes, It's the proper 616 Thor and Galactus from @NicKlein and I's Thor run. But then they go through a dimensional rift and into the world of FORTNITE.

So, yes. This all really happened. Comics are fun and weird, y'all. https://t.co/RAfkNArNYM

What this could end up meaning, if this is more than an easter egg, is that the Fortnite universe itself and all of its characters exist in WandaVision, and the Marvel Cinematic Universe by extension.

It’s a cool thing to think about, but it might not end up meaning a whole lot in the grand scheme of things. We can’t imagine you’ll be seeing a live-action Jonesy any time soon.

It does mean that when Galactus tried to destroy the Zero Point last season, it could have potentially had a major impact in not only the Fortnite universe, but perhaps even the Marvel universe at large.

What does any of this actually mean? Well, it’s tough to say because it’s pretty unlikely that Fortnite will impact the actual Marvel universe in any significant way. However, it would be fun to think about considering Fortnite has been established as an actual world. 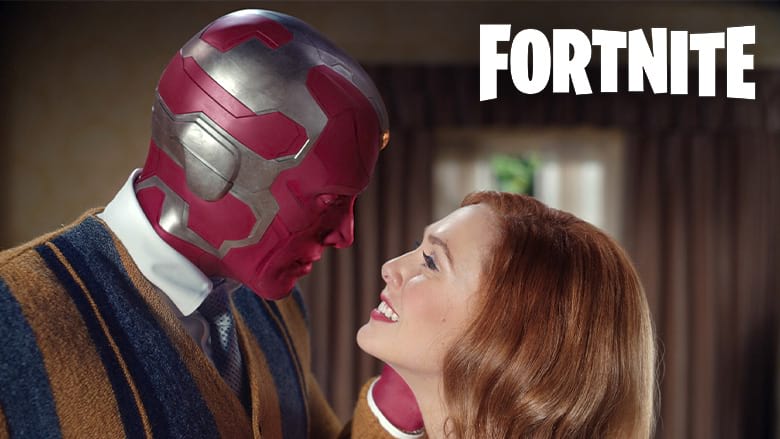 After the news of the Street Fighter crossover effectively put the WandaVision rumors to bed, it seems like all of this could now be back on the menu.

Jonesy has been rounding up people from all over the various universes and he has already plucked a pair of TV characters.

We don’t yet know how WandaVision will wrap up, and the way things are going, there might not even be the chance for a crossover.

Of course, there’s nothing stopping this crossover from happening because Wanda and Vision could just be taken from the comic book universe if Epic wants to go that route.

It’s just hard not to shake the feeling that the time for a crossover has passed because if it was going to happen, it just feels like it was supposed to happen a season ago.

Crazier things have definitely happened and this is Fortnite we’re talking about here, so nothing is ever off the table. If they want to make a crossover happen, they can do it and it could have nothing to do with the ongoing season if they wanted.

READ NEXT: Fortnite Leak Has Players Thinking Thanos is Returning