Despite it reaching almost 35,000 signatures, the White House responded to a petition on WhiteHouse.gov saying that they will not be building a Death Star. 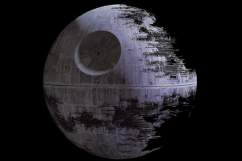 Death Star Petition Gets Over 16,000 Signatures on White House Website

The petition called for the American government to start the construction of a Star Wars inspired Death Star in order to “spur job creation in the fields of construction, engineering, space exploration, and more, and strengthen our national defense.”

As promised, since the petition reached at least 25,000 signatures, the White House had to at least humor the idea. Paul Shawcross, Chief of the Science and Space Branch at the White House Office of Management and Budget, issued a statement on the website, declining the petition.

The Administration shares your desire for job creation and a strong national defense, but a Death Star isn’t on the horizon. Here are a few reasons:

The Administration does not support blowing up planets.

Why would we spend countless taxpayer dollars on a Death Star with a fundamental flaw that can be exploited by a one-man starship?

Sorry to all you Darth Vaders out there, it’s just not happening. Though, it is nice to see the White House responding lightheartedly at such silly requests. Shawcross added that while we don’t have a Death Star, we do have a president “who knows his way around a light saber and advanced (marshmallow) cannon.”