It’s day two of the U.S. Supreme Court hearing on same-sex marriage, according to the official blog of the Supreme Court, the Defense of Marriage Act is “in trouble”:

If the Supreme Court can find its way through a dense procedural thicket, and confront the constitutionality of the federal law that defined marriage as limited to a man and a woman, that law may be gone, after a seventeen-year existence. That was the overriding impression after just under two hours of argument Wednesday on the fate of the Defense of Marriage Act.

The case is being referred to as the “United States vs. Windsor.”

Listen here to the audio of today’s discussion:

And here’s the transcript: 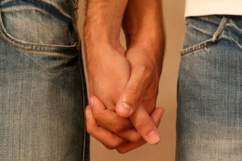 Loading more stories
wpDiscuz
0
0
Would love your thoughts, please comment.x
()
x
| Reply
The Defense of Marriage Act is "in trouble."