According to bdnews24, at least 149 people are dead and over 800 more are hurt following the collapse of a nine-story building in Bangladesh on Wednesday.

The collapse of the building, the Rana Plaza in Savar near Dhaka, is reported to be one of the worst building collapses ever in Bangladesh. The rear of the building started to give around 8:30 a.m. local time before the whole structure caved in moments later. According to locals, many bodies have been removed from the debris, but many more are still trapped. The injured are being taken to local hospitals.

The building contained a clothing factory, a bank and several other shops. Locals also said that at least 6,000 people worked in the factory, which routinely ran 24 hours a day.

One of the workers described the moment the building started to collapse.

“I was in the cutting section of the garment factory and suddenly we heard a huge noise and the building collapsed within a few minutes,” he said. “I removed the rubble and came out with two other workers. But at least 30 other workers in my cutting section were still unaccounted for.”

Building collapses are said to be frequent in Bangladesh, especilly in Dhaka, where construction laws re not strictly enforced. Engineer Abdur Razzak said that the building needed to be examined and even forewarned of a collapse.

Four army teams have joined the police, RAB, firefighters and locals in rescuing the victims still trapped under the rubble. 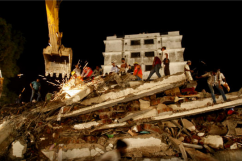 45 Dead, Including 11 Children, as Building Collapses in India

Loading more stories
wpDiscuz
0
0
Would love your thoughts, please comment.x
()
x
| Reply
The collapse of the building, the Rana Plaza in Savar near Dhaka, is reported to be one of the worst building collapses ever in Bangladesh.