New Jersey’s Democratic Senator Frank Lautenberg has died. The World War II veteran was the state’s longest-serving senator as well as the oldest member of the U.S. Senate. He was 89 years old.

Here’s what you need to know about this breaking story. Stay tuned for updates and photos.

1. He Died of Viral Pneumonia

NorthJersey.com reports Lautenberg died at 4:02 A.M. this morning of viral pneumonia. According to his staff he died in Manhattan at New York-Presbyterian Hospital. He had missed several votes due to illness in recent months.

2. He Was the Oldest Member of the U.S. Senate

Lautenberg was not only the oldest member of the U.S. Senate, he was also the last World War II veteran serving in the Senate. You can read here an account of his time during the war as solider in the Signal Corps.

3. He Was the Longest Serving Senator in N.J. History

4. He Announced in February That He Would Not Seek Re-Election in 2014

On February 14, 2013 Senator Lautenberg announced that he would not be seeking re-election for his New Jersey senatorial seat that he has occupied since 1982. NBC quotes Lautenberg as saying:

I will be traveling to my hometown of Paterson tomorrow to announce that I will not seek re-election in 2014. This is not the end of anything, but rather the beginning of a two-year mission to pass new gun safety laws, protect children from toxic chemicals, and create more opportunities for working families in New Jersey

5. The Democrat’s Death Opens a Vacancy to be Filled by Governor Chris Christie

Newark Mayor Cory Booker, a Democrat superstar, was already expected to run for Lautenberg’s seat in 2014 and may be the leading candidate for the appointment. Christie, as seen in the video above, was a vocal critic of Lautenberg and held him up as an example of everything that’s wrong with partisan politics in Washington. 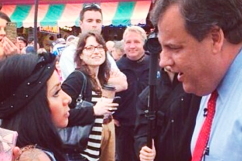 6. He Was a Very Liberal Senator

Govtrack.us describes Lautenberg as “a far-left Democratic leader according to GovTrack’s own analysis of bill sponsorship.” See Govtrack’s chart above. He received a lot of criticism over the years from conservatives for his views on public health, health care, and equal rights.

7. He Wrote the Legislation that Banned Smoking on Airline Flights

Always looking out for public health, Lautenberg was the champion of legislation that ended smoking on American air crafts. He also penned laws that banned domestic abusers from gun ownership, and standardized the .08 percent blood alcohol limit for driving and the age-21 drinking limit, among others.

8. He Had a Strong Working Class Background

Born in Patterson, New Jersey, Lautenberg was the son of Polish and Russian immigrants. After his father died, 19-year-old Frank worked nights and weekends while he finished high school to subsidize his family’s modest income. After serving in World War II in the Army Signal Corps, he went to Columbia University on the G.I. Bill and earned a degree in economics.

After his degree, Lautenberg earned his fortune by joining Automatic Data Processing (ADP) and becoming Chairman and CEO by 1952. Under his guidance the company become one of the largest in the world and went public in 1961. Now, the total assets of the company are estimated at over $30 Billion.

In 1988, Lautenberg faced a difficult race against Republican Pete Dawkins — the 1958 Heisman Trophy for the Army Black Knights. Initially playing from behind, Lautenberg’s campaign pulled through and he ended up winning the race, 54% to 46%. Lautenberg’s campaign manager for the race was James Carville, the famous Democratic strategist that helped Bill Clinton become president.

Here is a little bit of what Twitter has to say about Senator Lautenberg’s passing:

Senator Frank Lautenberg, a true champion of the people and the environment. May he rest in peace. ow.ly/lEDOo

.@corybooker statement: “Sen. Lautenberg was a model of leadership & service to me since before I even considered entering elected office.”