The main suspect in the ambush of two LAPD detective on the morning of June 25 is dead. The man was found dead in the attic of a home in the Willowbrook area of Los Angeles, following a dramatic 13-hour standoff with law-enforcement, reports CBS LA. 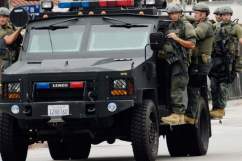 Manhunt in LA After 2 Cops Ambushed: 5 Fast Facts You Need to Know

The man was located by a member of the LAPD gang-unit and probation officer who went to the home on 2200 block of 117th Street near Mona Boulevard on a routine check. In the house they found the suspect, who shot the probation officer in the face. The officer underwent surgery overnight and is expected to be fine. A multi-agency siege ensued. The LAPD said they made “multiple attempts” to make contact with the man, according to the LA Times.

Los Angeles Police Department contain the shooting scene during a massive manhunt for a suspect who attempted to kill two detectives on June 25, 2013 in Los Angeles, California. The shooting happened in the early morning hours as the two detectives were ambushed and slightly injured outside the Los Angeles Police Department’s Wilshire Station, prompting the closure of a 25-square-block area in the Mid-City section of Los Angeles. (Photo by Kevork Djansezian/Getty Images)

He has shown no regard for human life by shooting at our officers.

Just before 7:00 a.m. this morning, SWAT teams shot tear gas into the home to force the man out. At 9:00 a.m., police entered the home and found the man dead in the attic. It’s unclear how he died, his name has not yet been released.

Loading more stories
wpDiscuz
0
0
Would love your thoughts, please comment.x
()
x
| Reply
A man suspected of shooting two LAPD officers has been found dead in the attic of a home in Willowbrook after a 13 hour standoff.