In light of the imminent verdict in the Bradley Manning trial, 17 members of the European Union’s Parliament have written an open letter to Barack Obama and Secretary of Defense Chuck Hegel.

The letter, signed by parliamentarians from France, Sweden, Spain, Germany, Croatia, Ireland and Portugal, calls for the United States to end the prosecution of the 25-year-old whistleblower saying that his leaks helped rather than harmed the United States:

Rather than causing harm, Bradley Manning’s release to WikiLeaks of the Iraq War Logs and the Afghan War Diaries shone much needed light on those occupations, revealing, amongst other abuses, the routine killing of civilians. The bleak picture painted by these war diaries contrasts greatly with the rosy progress reports being provided to the public by military and political leaders. PFC Manning has said he felt that if the American public had access to this information, this could ‘spark a domestic debate’ on American foreign policy ‘as it related to Iraq and Afghanistan’. Far from being a traitor, Bradley Manning had the best interests of his country in mind.

You can read the rest of the letter below via bradleymanning.org:

At 1 P.M. EST today, the 25-year-old Bradley Manning will most likely be sentenced to live the rest of his life in a prison. The Army private first class and former army intelligence analyst is facing 21 charges, including aiding the enemy, for leaking more than 700,000 classified military and diplomatic documents to transparency website Wikileaks.

The documents, ranging from embarrassing diplomatic memos to videos of helicopters killing civilians, have revealed shocking information, including documents relating to the dubious protocols being utilized at the prison in Guantanamo Bay. 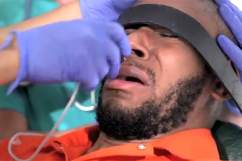 Manning’s trial has been fraught with confusions and complications, many surrounding the court marshal judge, Colonel Denise Lind. Lind has been accused by some of violating the first amendment’s freedom of the press by banning live media coverage of the trial. There is also a rumor circulating stemming from an unidentified “Washington Post report,” that Lind will be promoted to a judge position in the appellate system after the trail.

Another precaution we took was assuring the judge she’d get promoted after #Manning is convicted. pic.twitter.com/CsJAdO7uiA

Loading more stories
wpDiscuz
0
0
Would love your thoughts, please comment.x
()
x
| Reply
Members of the European Parliament have written an open letter to President Obama asking for the pardon of the whistleblower. The trial's verdict is released today.