George Zimmerman, a villain to many, is being credited for a heroic act. (Getty)

Reports coming from the Sanford, Florida Police Department today say that George Zimmerman, the man who was found not guilty in the death of 17-year-old Trayvon Martin, “pulled an individual from a truck that had rolled over” at a highway intersection less than a mile from where the Martin shooting took place, according to ABC News. According to police, the incident occurred at the Florida highway intersection of I-4 and route 417 at 5:45 p.m. Thursday evening.

According to a Fox News report, the blue Ford Explorer SUV was carrying two parents and their two children. Two men, said to be Zimmerman and another man who may be his bodyguard, pulled the trapped victims out of the crashed vehicle. Police arrived soon after the rescue. There are no reports of injury.

According to TMZ, the crash victims are white. Not that it should matter.

ABC News has reported that Zimmerman was not a witness to the crash and left the scene shortly after police arrived.

Above map shows the intersection of the accident (A) in relation to the location of the Trayvon Martin shooting (B).

This is the first known public sighting of Zimmerman since the verdict was read at his trial on July 13. The jury’s “not guilty” ruling has sparked ongoing protests that have continued for over a week after the event. 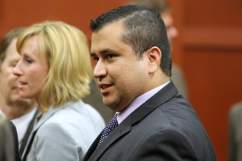 Zimmerman has been in hiding since the closure of his trial, according to his lawyers. He has also been unable to return to his home following “an enormous amount” of death threats. His lawyers also said that he has been wearing a bullet-proof vest when he goes into public.

Loading more stories
wpDiscuz
0
0
Would love your thoughts, please comment.x
()
x
| Reply
In his first public appearance since his verdict reading, George Zimmerman has emerged from hiding as a hero, saving a man in an overturned car on a highway in Florida last Friday.