UPDATE, September 28, 2015: Three years after photos of Trayvon Martin’s body were shown on national TV, George Zimmerman, who was acquitted of murder charges in Martin’s death, is taking heat on social media after retweeting a fan who posted a photo of Martin’s body. See the tweet and Zimmerman’s reaction to the outrage at the link below: 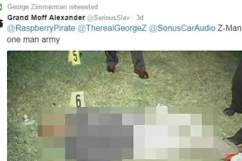 Read the original report from 2013 below:

America is abuzz as Trayvon Martin‘s case reaches a conclusion. The televised murder trial has been injected with sociopolitical significance as issues of race and gun control orbit around the witness stand. While the jury deliberates and as lawyers continue to call on witnesses, the mundane images of courtroom bureaucracy plaster themselves on televisions around the country, inviting people to watch along as if it were an episode of Law & Order: SUV.

While MSNBC covered the case, the last photo taken of Trayvon Martin was aired on live television. His black hoodie, his white sneakers, his lifeless body were on display for all to see. For those of you who stand against the publication of this image, I understand.  After all, this photo is deeply disturbing. But if we — as a nation — have decided to tune in and engage in formulating opinions as well as sweeping declaration about this case, then we must also look beyond the censors and the suited men and the mahogany courtroom.

Watch as the jury sees images of Trayvon’s body during a police officer’s testimony:

Loading more stories
wpDiscuz
12
0
Would love your thoughts, please comment.x
()
x
| Reply
As the jury reaches a conclusion on George Zimmerman's trial, a disturbing photo of Trayvon Martin's lifeless body was shown in the courtroom and televised.