George Zimmerman, who was acquitted in the 2012 shooting death of Florida teen Trayvon Martin, has again sparked outrage after he retweeted a photo of Martin’s body.

The tweet, which can be seen above, has since been deleted by Twitter. It was from a Zimmerman fan, who said, “Z-man is a one man army.” The anger directed toward Zimmerman hasn’t seemed to bother him:

Gee.. I sure hate offending people that have plotted and tried to kill me and my family… pic.twitter.com/filWTVToHq

Zimmerman, 31, has not shied away from the spotlight since he was found not guilty of second-degree murder in the Martin case. Last month he teamed up with an anti-Muslim Florida gun shop owner to raise money by painting a Confederate flag.

Zimmerman has also been arrested on domestic violence charges, and was shot during a road rage incident earlier this year.

His tweets from the account @TherealGeorgeZ have caused angry reactions in the past. Here are some of his recent posts and retweets:

@TherealGeorgeZ Keep trolling the media hard, George. They deserve it.

I wonder when Twitter will take these images down??? pic.twitter.com/avVfhlzkHI

Cause you're loud mouth cowards. How does it feel to know it took a crazy WHITE man w/balls to try 2 assasinate me? https://t.co/CWztjw1bjj

Oooh you, YOU! Yea, you! You're a clever 1! 'cept for the fact I didn't murder him. Thanks for playing sweetheart. https://t.co/eaFNSapm6g

If u really think that picture of him @ 8 years old is who attacked me, well fall in line w/the rest of the apes. https://t.co/xYMTF0sBDB 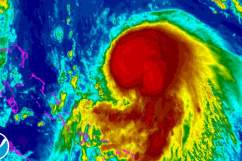 Loading more stories
wpDiscuz
34
0
Would love your thoughts, please comment.x
()
x
| Reply
George Zimmerman has sparked outrage by retweeting a photo of Trayvon Martin's body from a fan who called him a "one man army." See the tweet here.