Derek Medina made headlines today when he posted a picture to Facebook of his dead wife, crumpled on the floor of what appears to be his kitchen. Above the photo, he posted a full confession saying that he was going to jail for the rest of his life for killing her.

This self-proclaimed actor and author had a strange YouTube channel.

He’s been listed as an actor on the USA show Burn Notice; here is a video clip of Derek Medina on the show that appears to have been filmed on a cell phone facing the television.

From the Derek Medina Youtube channel, here is a man who appears to be the suspected murderer pummeling a punching bag in a very violent fashion. 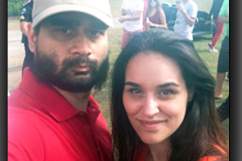 Here is a video of Derek Medina sitting in a car with his hood up singing along to Bill Withers’ “Ain’t No Sunshine” as it plays on his cell phone.

The reference to “when she’s gone” is chilling.

Below is a video Derek Medina talking about the March 2013 release of his self-help book.

Here is a video of Derek Medina’s 89-year-old grandmother reading the title of his self-help book aloud.

My 89year old grandma is my number one fan of my 6books" heMy 89th grandma is the person who inspired me to write my first book and the 6books in total well that's emotional writer for you" Emotionalwriter.com2013-07-11T20:16:54.000Z

Read More
Crime, Derek Medina, Facebook, Florida, Murder, Relationships, Youtube
Derek Medina, the Florida man who confessed to killing his wife on Facebook, was a self-described actor and author. Here are videos of him from YouTube.