Today at 11:30 a.m., Mayor Bloomberg and NYPD commissioner Ray Kelly announced the largest seizure of illegal guns in the New York Police Department’s 168 years. Police are convinced this bust will reduce the amount of gun violence in the city. This year there have been 77 incidents of gun violence in New York City.

Here is what you need to know about the giant NYPD operation operation:

1. Hundreds of Guns Were Recovered

Some of the 250+ weapons seized by NYPD (via @ChadRachman) pic.twitter.com/eNIvYQbDrj

Officials say 254 weapons were recovered, including high-capacity assault rifles and a fully automatic machine gun. Some were attained legally in North and South Carolina, and others were stolen and then resold on the black market.

Half of the illegal guns seized by NYPD from traffickers in South & North Carolina, in arrests being announced today. pic.twitter.com/cwe3UKHMjU

An undercover officer was crucial in making the arrests, as well as a wire tap and coordination with police officers in Sanford, North Carolina and Rock Hill, South Carolina. At the center of this gun smuggling operation was a music recording studio in Brooklyn. One of the main suspects, according to Ray Kelly, often posted pictures of guns and money on his Instagram.

The guns were accumulated out of state and then sold to an undercover NYPD agent who posed as a black market gun dealer in New York City.

The undercover officer was able to make relationships with the illegal gun sellers on the Chinatown bus from Charlotte, NC to New York City. The NYPD’s undercover officer bought a number of weapons while authorities built a case.

3. Many of NYC’s Illegal Guns Come From North and South Carolina

Mayor Bloomberg, an outspoken advocate for gun control, used this event rail against North and South Carolina’s lax laws. These laws, he said, pose a danger to people in New York City because they allow gun traffickers to bring guns from the Carolina’s where they can be easy attained.

At least 39 of the weapons turned up by the bust were legally purchased weapons that were reported stolen in North Carolina.

4. Bloomberg Used the Case as Evidence That Stop & Frisk is Essential

"I can't take them…In Brownsville…we got like, whatchamacallit, stop and frisk." -23-yr-old gun runner on (not) transporting to Bk/NYC.

Today Mayor Bloomberg announced that a wire-tapped conversation between suspects turned up a fear of selling guns in Brooklyn because of the NYPD’s stop and frisk program.

The announcement of the gun bust came just one week after the NYPD hit a major setback when a Federal judge declared their controversial Stop and Frisk policy unconstitutional. Today’s announcement will certainly buttress Bloomberg’s belief that his invasive police tactics have contributed immensely to the falling crime rates in New York City.

In October 2012, Mayor Bloomberg announced that the NYPD had uncovered a major gun trafficking operation in East Harlem. The bust, known as “Operation Micky Mouse Trap,” turned up over 100 weapons including assault rifles, shot guns, and hand guns of all sizes. 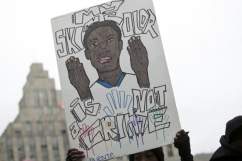 LISTEN: Bloomberg Says MORE Minorities Should Be Stopped and Frisked

Loading more stories
wpDiscuz
1
0
Would love your thoughts, please comment.x
()
x
| Reply
The NYPD seized 254 guns, including assault rifles and a fully automatic machine gun. The bust is the biggest in NYC history and took police to the Carolinas.