Police stormed a Louisiana bank and killed a gunman after he fatally shot one hostage and critically injured another, reports NBC News.

The news is the tragic conclusion after a man held three hostages at gunpoint at Tensas State Bank in the rural town of St. Joseph, beginning around 12:30 p.m. Tuesday. The suspect has been identified as 20-year-old Fuaed Abdo Ahmed. Two of the hostages were female bank tellers and the other a man. One of the tellers, Patricia White, was freed after nine hours. The other two were shot after police were unable to successfully negotiate with the suspect. Abdo was shot dead as a SWAT team stormed the bank. The two hostages both suffered from upper body wounds and were taken to the hospital where one died and the other remains in critical condition.

Louisiana State Police Colonel Mike Edmonson announced in a news conference Tuesday night that one of three hostages being held by a gunman at a St. Joseph bank was released and is being questioned, reports The Town Talk. 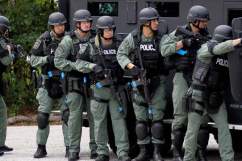 Edmonson said the hostage released was a female bank teller at Tensas State Bank. The two others, another female teller and a man, are still being held, but are reportedly in good condition and are being provided with food. Negotiators have been talking to the gunman throughout the day trying to calm him down.

“We feel like we’re being productive,” Tensas Parish Sheriff Rickey Jones said. “The negotiators are doing a good job.”

The suspect is a 20-year-old gunman whose family owns a convenience store in the same town. He seized the hostages around 12:30 p.m. Family members of the hostages told The Monroe News Star that the gunman had given authorities 10 hours to satisfy his demands, which were not released.

At about 4 p.m., an alleged family member of the suspect broke through a police perimeter with their car and drove toward the bank. They were arrested at gunpoint.

Negotiators plan to work with the gunman through the night.