At around 10 p.m. on Saturday night, police accidentally shot two innocent bystanders near Times Square when they open fired on a mentally disturbed man that was walking in and out of traffic. The intended target, the 35-year-old man, had already been hit by several cars when police say he pulled empty his hand from his pocket and simulated shooting a weapon at intervening officers. You can watch a cell phone video of the incident above.

Shot at him 4 times

The innocent victims were two woman, one aged 35-years-old, the other 54-years-old. Both sustained non-life threatening injuries that NBC has described as “grazings,” but the older woman, who was using a walker at the time of the incident, was shot in the knee.

A bystander on the seen, Kerri Ann Nesbeth, was able to tweet a photograph of one of the injured bystanders.

The man who was the intended target of the shootings was eventually tasered and brought into custody.

This cannot be happening in front of me @CNN pic.twitter.com/aREMVNp8F4

The incident is reminiscent of the events of August 26, 2012, when police open fired on a lone gunman and accidentally injured seven bystanders on a crowded sidewalk outside the Empire State Building. 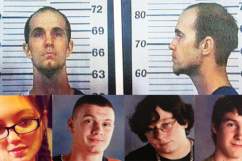 Loading more stories
wpDiscuz
1
0
Would love your thoughts, please comment.x
()
x
| Reply
Police were trying to detain a man blocking traffic when he simulated having a weapon. When they open fired two bystanders outside of NYC's Port Authority had been shot by accident.