The TSA has now confirmed that and officer was killed and that he has become the first TSA officer killed in the line of duty.

The TSA was signed into creation on November 19, 2001 by George W. Bush in the wake of the plane hijackings on September 11.

The LA Times is now reporting that until one month before the attack there were permanent armed guards at the TSA checkpoints. 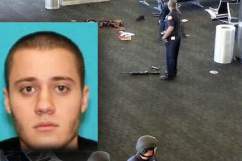 Loading more stories
wpDiscuz
0
0
Would love your thoughts, please comment.x
()
x
| Reply
He is the first casualty since the agency's creation in 2001.