The state run media in North Korea are reporting that their glorious leader, Kim Jong-Un, has had his uncle, Jang Song Thaek executed. State TV ran photos of his arrest during a news broadcast (above).

The official party line is:

It’s been reported that Kim Jong-Un had his uncle removed as a consolidation of power. That Jang Sung-Taek was more in favor of economic development rather than military, a view not shared by Kim-Jong Il’s regime. Taek’s title in the political sphere was as his nephew’s “key policy advisor.” 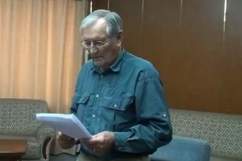 Loading more stories
wpDiscuz
0
0
Would love your thoughts, please comment.x
()
x
| Reply
This is the latest consolidation of power.