Yesterday an Italian court overturned an appeal and reinstated the original guilty verdict for Amanda Knox, the now 26-year-old American convicted of a 2007 murder.

The court sentenced Knox, who was released and allowed to return to the United States in 2011, to 28 years and 6 months in prison for the brutal slaying of Meredith Kercher, Knox’s roommate while the two studied abroad in Italy.

This morning, Knox went on Good Morning America to give a teary-eyed reaction to the verdict. Although extradition is possible, but very unlikely, Knox still tells the people at GMA that “I will never going willingly back … I’m going to fight this until the very end.” 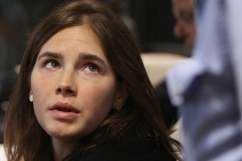