Michael Kennedy, 33, was a fun-loving, Marine veteran who saw action in Iraq, before joining up with the Boston Fire Department, reports The Boston Globe. Kennedy died alongside Lt. Ed Walsh, 43, battling a devastating blaze in the Boston’s Back Bay neighborhood on March 26.

Here’s what you need to know about this firefighting hero:

1. He Was On Scene at the Boston Marathon Bombing

Kennedy was honored for his actions after the Boston Marathon Bombings in April 2013. He was one of the first on scene following the atrocity, reports WHDH. For 2014, Kennedy was in training to run the marathon.

2. Kennedy Was in a Motorcycle Group Called the ‘American Infidels’

He was in-love with his motorcycle. Fellow firefighter, Don Matchem, told The Boston Globe, “He was always willing to help you with your bike.” Kennedy was a member of the biker enthusiasts, the American Infidels. With his friends there he was known as Wildman. It was name that reflected his enthusiasm for firefighting. One friend, Ashley Duckett, said, “I can guarantee you he didn’t think twice about running in there.”

3. He Was a Fitness Trainer

Kennedy was a fitness enthusiast and worked part-time as a Crossfit trainer. When he wasn’t battling blazes, he was a volunteer with Big Brothers Big Sisters. In February 2014, he led a group of his firefighting brothers on a blood donation trip to Rhode Island to show support for a 6-year-old boy with leukemia there. One friend said, “He was a tough guy, but he also had, like the best sense of humor. The party didn’t start until he showed up…it was like when Norm walks into the bar in Cheers.”

The Boston Celtics show their respect to Lt. Ed Walsh and Michael Kennedy prior to last night’s game against the Raptors. (Getty)

After leaving high school, Kennedy went to college for a while before deciding to enlist in the Marines, where in he reached the rank of sergeant. He saw action in Iraq, being based in Haditha, reports The Boston Herald. When his service was up, Kennedy joined the Boston Fire Department in 2007. One friend, Derek Cloutier, who is also a veteran, said that Kennedy was not the type to talk about his time in combat or his experiences in the aftermath of the Boston Marathon Bombing.

5. Nobody Who Lived in the Building Was Hurt

The fire has been described as moving so fast and burning “like a blow torch,” according to Boston Fire Deputy Chief Joseph Finn. In total, 13 other firefighters suffered non-life threatening injuries. Thanks to the heroic efforts of Walsh, Kennedy, and the other firefighters on scene, no residents of 298 Beacon Street, where the fire occurred, were injured. 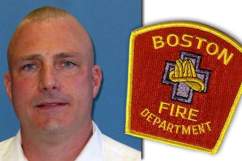