Barack Obama is known to be a pretty fun guy, but man does he kill it in this appearance on Between Two Ferns.

The president picks up Zach Galifianakis’ signature dry, mean, and bizarre wit and sends it back right at him with digs like comparing a third presidential term to the third Hangover movie — “It just didn’t work” — and telling Galifianakis he has a 3-inch vertical after the comedian suggested people let him win at basketball.

It turns out Obama was there to plug the Affordable Care Act (aka ObamaCare) because, you know, this is where you go to get in touch with the young kids these days.

Obama may have gotten a little more than he bargained for when Galifianakis brought up two of the president’s most controversial programs: NSA surveillance and drones. Apparently, the comedian doesn’t have a cell phone or computer because he doesn’t want “you people looking at my texts.” 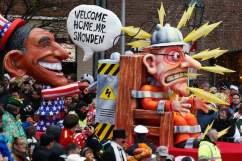 Loading more stories
wpDiscuz
0
0
Would love your thoughts, please comment.x
()
x
| Reply
Barack Obama appeared on Funny Or Die's "Between Two Ferns With Zach Galifianakis" where he picked up the shows dry and odd humor very well. Watch it here.