Matt de Grood, 22, is accused of killing five people during an end-of-year college party in the Calgary suburb of Brentwood on April 15.

Police say the attack began at 1:20 a.m. Five people — four men and one woman — were killed. De Grood has been charged with five counts of first-degree murder.

I talked to the member [Inspector de Grood] just before coming down here. He … asked that I would pass on — he’s heartbroken, as his wife is — and he said, ‘Could you please pass on to the families our total and complete sorrow and condolences as to what happened? They feel so much pain for the families that were impacted by their son.

The chief added that de Grood’s parents are cooperating fully with the investigation.

The Canadian Institute of Management, which describes itself as Canada’s senior management association, lists Doug de Grood as a member. The non-profit organization was founded in 1942. Its website says it is “dedicated to enhancing managerial skills and professional development.” it has more than 55,000 members in 17 branches throughout Canada.

According to his LinkedIn page, Inspector de Grood has worked in many capacities over the years in the Calgary police force, including the mountain bike patrol, the Chinatown patrol and as a District Asian Liaison. 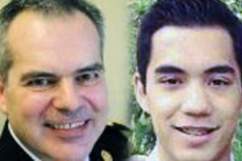 The Facebook message is related to the Megadeath song “Dread and the Fugitive Mind.” He was arrested by police about 40 minutes after the 911 call was made on April 15. After fleeing the scene on foot, he was apprehended by cops using a K-9 unit. Before being booked into jail, he was taken to hospital to be treated for a dog bite. He is the sole suspect, reports the Calgary Herald.

De Grood a University of Calgary graduate who was headed to law school. According to his Facebook page, he graduated from Calgary with a Bachelor of Science in Psychology and a minor in law and society. According to CBC, he graduated with distinction.

3. 2 of Those Killed at the Party Were in a Local Band

Zackariah Rathwell was one of those killed in the attack. (Facebook)

Police said three of the victims in the attack were pronounced dead at the scene, while two more died at a local hospital after being put on life support. One more person was treated for minor injuries. Four of those who were killed were from Calgary, including the female victim. One of the men was from Priddis. Two of those slain have been named as Zackariah Rathwell and Josh Hunter.

Rathwell and Hunter were in the popular local band, Zackariah & The Prophets. According to the band’s Facebook page, they had just played at an album launch party on April 13.

A neighbor, Doug Jones, told CBC that he saw about 20 people at the party:

When it started to get dark, they moved inside and once inside, you wouldn’t even be able to tell there was anything really even going on. It wasn’t loud at all. 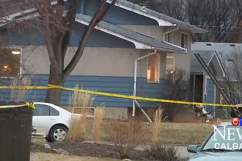 4. Police Have Not Identified a Motive

This is a photo of the suspect in the mass homicide from overnight. The son of a CPS officer #yyc pic.twitter.com/uHxfL5feiC

Police have not released a motive for the stabbing., reports CP24. De Grood will be charged with first degree murder in the case. Drugs and alcohol are not considered a major factor in the attack.

Police Chief Rick Hanson told the media in a news conference that he was an invited guest to the party. When he was there, he obtained a knife, Hanson said. De Grood also brought “an instrument” from work, but primarily used a knife he got at the scene and targeted his victims, the chief said. De Grood had just left his job at Safeway, where he works as a produce clerk, before going to the party.

He had no prior criminal history.

5. He is Passionate About Equality

This “E” was the profile photo on Matthew de Grood’s Facebook page.

Matthew DeGrood explains the meaning of the “E” on his Facebook page.

One of de Grood’s likes on Facebook is Cognitive behaviorial therapy. In addidtion, he’s a fan of motivational speaker Chris Gardner, of whom the Will Smith movie The Pursuit of Happyness was based on.

Loading more stories
wpDiscuz
3
0
Would love your thoughts, please comment.x
()
x
| Reply
De Grood, son of a 33-year police veteran, is only suspect in the stabbing deaths of five people at a party.