Louisiana Congressman Vance McAllister, a self-described family-values conservative and practicing Baptist, is embroiled in a scandal after being caught on tape kissing a married female staffer inside his office building. On April 28, it was reported that McAllister would not be seeking reelection.

Here’s what you need to know about the developing story:

1. He Was Caught on Video Kissing a Staffer

You can watch the video in question above, via the Ouachita Citizen newspaper.

The day after the news of the scandal broke, a man calling himself, “Teflon Man,” emailed Gawker, saying that he found the disgraced Congressman’s cell phone number and began a text exchange with him.

Gawker reported the exchange as follows:

McAllister: I messed up

McAllister: Google, you will see

TM: You talked to Heath?

McAllister: No, he doesn’t want to talk to me and I understand

McAllister then asked who he was talking to, but Teflon Man didn’t answer.

Gawker got in touch with McAllister’s chief of staff, Adam Terry, who Gawker reports didn’t deny that the exchange trade took place.

Details on the staffer and the scandal here: 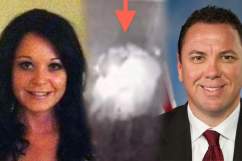 In his statement on the scandal, he said:

In his statement, he included, “While I realize I serve the public, I would appreciate the privacy given to my children as we get through this.”

He told Roll Call that they uphold this Sunday tradition:

We have Sunday morning breakfast before church,” McAllister said. “I don’t do the dishes, but I do cook. I’m the griller.

The News Star of Monroe, La. reported Tuesday that, according to a local pastor, McAllister’s office manager, Leah Gordon, leaked video of the kissing session.

3. He Invited a ‘Duck Dynasty’ Couple to the State of the Union

Earlier this year, he famously invited the Duck Dynasty couple Willie and Korie Robertson to the State of the Union, raising some eyebrows, especially after the show’s patriarch, Phil, made statements against homosexuality in December.

The Robertsons live in the 5th District of Louisiana, and their backing helped him get elected.

4. He Served in South Korea

After graduating high school, McAllister joined the Army. He was a member of the Louisiana National Guard before he went off to college.
He went to the University of Louisiana at Monroe but never finished.