Monica Lewinsky has penned a big Vanity Fair piece for the mag’s May issue. The print-edition hits newsstands on May 13 but is available online with a subscription to Vanity Fair from May 8.

1. Lewinsky Says She Was Never Paid Off

She addresses her relative silence:

The buzz in some circles has been that the Clintons must have paid me off; why else would I have refrained from speaking out? I can assure you that nothing could be further from the truth.

Though at the age of 40, she says she has to stop, “tiptoeing around my past—and other people’s futures. I am determined to have a different ending to my story. I’ve decided, finally, to stick my head above the parapet so that I can take back my narrative and give a purpose to my past. (What this will cost me, I will soon find out.)”

Or maybe it was that appearance on The Tom Green Show that made her become a recluse.

2. Lewinsky Says Her Affair With Clinton Was ‘Consensual’

She emphasizes that her affair with President Clinton was “consensual.” Lewinsky adds:

Sure, my boss took advantage of me, but I will always remain firm on this point: it was a consensual relationship. Any ‘abuse’ came in the aftermath, when I was made a scapegoat in order to protect his powerful position. . . . The Clinton administration, the special prosecutor’s minions, the political operatives on both sides of the aisle, and the media were able to brand me. And that brand stuck, in part because it was imbued with power.

3. Her Career Plans Were Severely Altered by the Affair

She reveals what she did after the affair. The former White House intern says that she turned down $10 million-a-year jobs to study. She has a social psychology master’s from the London School of Economics.

4. Lewinsky Decision to Get Back in the Public Eye After Tyler Clementi’s Suicide

She was deeply moved by the case of Tyler Clementi, the Rutgers freshman who committed suicide at just 18 after he was secretly filmed kissing another man in September 2010. Lewinsky says although she never attempted suicide, she did have “temptations.” There were low points up to now and in the years after the affair, Lewinsky writes that her mother was particularly worried about her daughter:

She was reliving 1998, when she wouldn’t let me out of her sight. She was replaying those weeks when she stayed by my bed, night after night, because I, too, was suicidal. The shame, the scorn, and the fear that had been thrown at her daughter left her afraid that I would take my own life—a fear that I would be literally humiliated to death.

5. She Was One of the Internet’s First Celebrities

Lewinsky claims to have been the first person to have been publicly humiliated through the Internet thanks to her coverage on the Drudge Report. She writes:

Thanks to the Drudge Report, I was also possibly the first person whose global humiliation was driven by the internet. 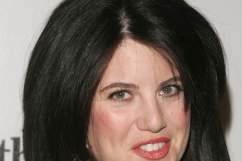