Alexander and Kyla Ryng are the young married couple who were found dead of gunshot wounds on June 4 in their Connecticut home, reports NBC Connecticut.

Alex, 26, and Kyla, 27, lived in the city of Bristol with their three children.

1. The Dead Couple Were Discovered by Their Kids

The couple had three children, ages 4, 3 and 20 months. The children were not harmed in the incident. The alarm was raised when one of the kids went to get help from a neighbor after the dead bodies were discovered by the kids. The children are now in the care of their grandmother.

It isn’t clear who killed whom in the murder/suicide, but cops have been keen to stress that there was never any threat to the public. One neighbor told NBC Connecticut, “This is a very quiet neighborhood. I grew up here; I bought the house from my parents. That’s the reason I bought it, it’s always quiet.”

A student who was heading to school nearby to the home heard a woman screaming and three loud bangs at 7 a.m., reports The Hartford Courant. The student, Devon Judge, added that his phone was dead so he couldn’t dial 911. 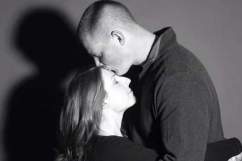 Alex & Kyla Ryng Photos: The Pictures You Need to See

The Hartford Courant reports that Kyla Ryng had filed divorce papers at a court in New Britain on the Friday before their deaths. The court papers said the marriage had broken down and was “irretrievable.” In addition, she wanted the house, shared custody with the couple’s three kids, as well as alimony and child support.

3. Alex Was Active in the US Army

Alex Ryng lists his profession on Facebook as being in the U.S. Army. Kyla Ryng said she worked at: “Full-time stay at home mommy & wife, and I love it.”

4. Alex Ryng Was a Pro-Gun Advocate

According to his Facebook page, Alex Ryng left his job at Catco Construction in January 2013 to enroll in an officer leader’s course in Fort Leonard Wood, Missouri. He completed the course in May 2013. He added that he studied physics at Middlebury College.

It also appears through his Facebook postings that Ryng was a pro-gun advocate.

5. The Couple Were Both Natives of Bristol

Both Alex and Kyla are natives of Bristol, Connecticut. Kyla went to Bristol Eastern High School while Alex was at Bristol Central High School where he was on the honor roll.

Alex & Kyla Ryng Photos: The Pictures You Need to See

Loading more stories
wpDiscuz
1
0
Would love your thoughts, please comment.x
()
x
| Reply
Alex Ryng and his wife, Kyla, were found dead in their home in Bristol, Connecticut. Cops are calling it a murder/suicide.