Crystal Lowery pictured on her Facebook page, 24 hours before her arrest.

Crystal Lowery has been arrested and is being charged with the murder of Beverly Carter. She was taken into custody at her home without incident on October 30.

In September 2014, real estate agent Beverly Carter was found dead in Pulaski County, Arkansas. Her body was buried in a shallow grave. Police believe that Arron Lewis was the culprit, alleging that he arranged to meet Carter at a house that was for sale. Carter had told friends that she was going to show the home to a potential cash-buyer.

1. She Just Filed for Divorce From Lewis

She’s the wife of Arron Lewis, the man who was already charged in the murder of real estate agent Beverly Carter back in September. According to the couple’s divorce petition, Lewis and Lowery were married on April 20, 2014, have been separated since August 2014, on October 27, filed for divorce from Lewis. One of the reasons Lowery gives for the divorce was the fact that she didn’t know Lewis was convicted felon at the time of their marriage.

However, in November 2013, five months before the couple were wed, Lewis posted on Facebook, telling the world that he was a seven time felon.

You can read the couple’s divorce petition here:

Arron Lewis posted this on his now-deleted Facebook page prior to his arrest:

But back in March 2014, things appeared to not be going well in the relationship when Lewis posted this:

2. Crystal Lowery Is Being Charged With Capital Murder

Lowery will be charged with capital murder and kidnapping in the case. At the time of his arrest, Arron Lewis alleged that he had an accomplice named “Trevor.” Police later confirmed that they had interviewed “Trevor,” and that he was not considered a suspect.

3. Hours Before Her Arrest, Lowery Said ‘I Have No Room for Snakes in My Life’

Just a day before being arrested, Lowery posted on Facebook that she was going out to dinner with some friends who had stood by her. An hour before that post, Lowery said:

I am so glad to have the good friends I have and to figure out who the snakes in the grass are before they bite me …….. I have no room for snakes in my life !!

On October 28, she posted on Facebook about missing her daughter, saying she didn’t “know if [she] can go another week without [her].” According to Lowery and Lewis’ divorce petition, they had no children and “none were expected.”

5. She’s Studying to Be a Nurse

According to her Facebook, Lowery is a native of Lake Charles, Louisana, but lives in Sherwood, Arkansas, and is studying nursing at the University of Arkansas at Little Rock. 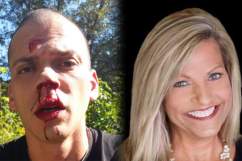 Loading more stories
wpDiscuz
10
0
Would love your thoughts, please comment.x
()
x
| Reply
Crystal Lower is the wife of Arron Lewis. She's being charged with the murder and kidnapping of Beverly Carter.