Alleged cop killer and survivalist fugitive Eric Frein has been arrested in Pennsylvania. His capture was confirmed by Pennsylvania State Police. In a brief statement, state cops said, “We have taken Eric Frein into custody.” The arrest was made at 6 p.m on October 30.

Frein, 31 had been on the run for nearly seven weeks in the Pocono Mountains. He’s accused of killing Cpl. Bryon K. Dickson II and wounding Trooper Alex T. Douglass of the Pennsylvania State Police at their barracks in Blooming Grove on September 12.

1. There Was No Gunfight Between Cops & Frein

Frein has been on the run since September 12, and cops feared he would attempt to go down in a blaze of glory. According to the FBI, Frein was surrounded on Thursday afternoon and he surrendered. Not shots were fired.

The accused killer was holed up in an abandoned airport hangar. WPVI reporter Chad Pradelli tweeted that Frein had told cops that he was in the hangar for 48 days, but they don’t believe him.

Fox 29 reporter Jennifer Joyce says that Frein was caught as he was walking back to the hangar, he was unarmed at the time. A bomb squad cleared the hangar before it was searched by cops. Inside, police found “high-powered weaponry,” reports the AP.

Frein was shackled with the handcuffs that belonged to the officer he killed, and he was transported in that officer’s patrol car. The suspected killer spent the night in a cell in the Blooming Grove barracks, seven weeks after he’s believed to have shot two state police there. 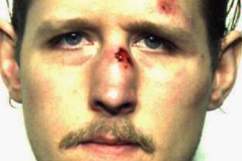 2. The D.A. in Charge Is Seeking the Death Penalty

Eric Frein was arraigned in court on murder charges. He will be held without bail.

According to ABC Philadelphia, Frein confessed to the murder of Cpl. Byron Douglass. As he was brought in and out of the courtroom, angry protesters shouted at Frein, “Are you sorry?” and “Why did you do it?” The former fugitive looked gaunt and had a bloodied nose with cuts around his eye and on his cheek.

He has his first preliminary hearing on November 12. The accused cop-killer entered no-plea in the case. Pike County District Attorney Raymond Tonkin told the Associated Press that he will be looking for the death penalty. In a press conference late on the night of October 30, Sam Rabadi, chief of the Philadelphia office of the Bureau of Alcohol, Firearms and Explosives said “He has been stripped of his guns, his bombs, and now his freedom.”

After the news of Frein’s arrest became public, a law enforcement source called Frein a “coward,” according to The Patriot News.

During a CNN interview, a friend of Frein’s named Jack had said the accused killer was “intelligent.” Watch the interview above.

3. He Surrendered in Tannersville

A giant helium balloon was used in the search for Frein. (Getty)

The Philadelphia Inquirer reports that Frein was arrested close to Tannersville. The hangar where he was found is at Birchwood-Pocono Airpark, a facility that was built by legendary pilot Wally Hoffman. It’s about 75 miles east of the New York state line.

Police discovered this campsite thought to have been left by Eric Frein. (Pennsylvania State Police/Getty)

On October 29, police had said that they felt he was close to state Route 390, Tannersville is 25 miles from that location.

Police had found clues for Frein throughout the search such as diapers and cigarettes.

4. Over 1,000 Officers Were Involved in the Search for Frein

Some of the pipe bombs and other materials found during the search for Frein. (Getty)

By the end of September 2014, the amount of officers involved in the search had risen to 1,000. Those officers were comprised of state cops, ATF, FBI and the U.S. Marshals Service. The cost of the search is being estimated at around $10 million dollars.

5. One of the Troopers Hit by Frein Was Released From the Hospital Last Week

On September 12, Frein’s alleged to have killed Cpl. Bryon Dickson II in Pike County. He seriously wounded Trooper Alex Douglass in an horrific attack outside a state police barracks. On October 17, Douglass was released from hospital. Douglass underwent four surgeries while in hospital.

The manhunt had canceled Halloween for kids in Pike County. The day after Frein was arrested, Halloween was back on for kids.