Cassandra pictured with her mother, Jackie. (Screengrab via NBC Connecticut)

A 17-year-old girl is fighting the state of Connecticut over her right to refuse life-saving health treatment. Cassandra Fortin suffers from Hodgkins Lymphoma, a relatively treatable form of cancer. She was diagnosed in September 2014. She has resisted the chemotherapy to treat the condition and is now in the custody of the state. Her case went before the Connecticut Superior Court. Under state law, Cassandra is not allowed to make decisions about medical care until she is 18.

Here’s what you should know about Cassandra and this controversial medical case:

1. Cassandra Ran Away From Home to Avoid Chemo

Speaking to Fox News, Cassandra’s mother, Jackie, said that her daughter is financially independent and makes most of her own life decisions, despite technically being a minor. In an interview with NBC Connecticut, Jackie said “She’s very independent. She works a job, pays her own bills [and has] her own responsibilities.” The Hartford Courant reports that Jackie initially forced her daughter to go along with the chemo in November 2014. Her compliance with the doctors ended when Cassandra ran away from home to avoid treatment.

2. She’s Being Kept in a Children’s Hospital Against Her Will

The Hartford Courant reports that the Connecticut Department of Children and Families have taken custody of Cassandra and she is being kept at the Connecticut Children’s Medical Center in Hartford against her will. The family are being represented, in part, by Assistant Public Defender Joshua Michtom who told the Courant:

The bigger question is: Can a smart and knowledgeable 17-year-old make the same choice, for better or worse, than she would be able to make without state interference nine months from now, when she turns 18?

The family are also being represented by attorneys Michael Taylor and James Sexton of West Hartford.

In a statement the Connecticut DCF said it was forced to act because “experts, such as the several physicians involved in this case, [told] us with certainty that a child will die as a result of leaving a decision up to a parent.”

3. Cassandra Told Her Mother Years Ago That She Would Never Have Chemo

WTNH reports that the decision wwent before the Connecticut Superior Court on January 8. The court decided that Cassandra has to continue her chemo under state supervision, reports the Hartford Courant. After leaving the court, Cassandra’s mother told reporters, “My daughter is mature, this was a mistake.”

James Sexton had told WTNH that he “would not be surprised with an abbreviated court decision very quickly after the oral arguments, followed by a full decision in the coming months.” In a letter to the Supreme Court, Cassandra wrote that “no one has let [me] breathe.” Her mother says that Cassandra’s decision was not motivated by religious belief and that years ago, Cassandra has said in passing that she wouldn’t want chemo if she contracted cancer. Jackie told NBC Connecticut that she has never had any problems with raising Cassandra.

4. Cassandra Has ‘Put Up a Fight’ Against Hospital Staff

(Screengrab via the Hartford Courant)

Cassandra had to be restrained by hospital staff and “put up a fight,” according to her mother, when she had preparatory surgery for her chemo, reports the Hartford Courant. Jackie goes on to say that her daughter hasn’t been allowed to leave her hospital room in four weeks. The hospital notified the DCF after Cassandra had part of her lymph node surgically removed in November. The Courant reports that Jackie told the hospital that she was taking her daughter out of the hospital and was seeking a second opinion. The DCF went to the supreme court and won a temporary custody order. Attorney Dan Klau, who is familiar with the case but not involved, told NBC Connecticut that the DCF still have the law on their side, he says that Cassandra “was skipping medical appointments and fighting with the doctors over the diagnosis and treatment.”

One of the family’s attorneys, Michael Taylor. (TaylorSexton.com)

In the state of Connecticut, a person can drive at 16 and have an abortion without parental consent at 17. Attorney Michael Taylor told Fox Connecticut that this is proof that a 17-year-old should have control over their medical treatment. He said in an interview with the station:

You’re balancing a serious need for treatment against her fundamental right to say what goes on with her body.

Cassandra turns 18 in September 2015. Meanwhile she remains in a hospital and is getting chemo against her will. 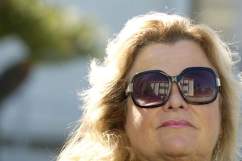 Loading more stories
wpDiscuz
23
0
Would love your thoughts, please comment.x
()
x
| Reply
Cassandra Fortin is the Connecticut 17-year-old girl who has cancer but doesn't want chemotherapy. The state has taken her into custody, citing "medical neglect" by her mother.