Sam Driskell has been named as one of the people found dead inside a home in Paulding County, Georgia. He had been a long serving sheriff’s deputy in the Paulding County Sheriff’s Office. On January 6, officers in Hiram were called to rural home in the Atlanta suburb of Hiram. There, they made the gruesome discovery, four people had been shot dead.

1. Driskell Was Killed in His Sleep

The family lived along this quiet country road in Hiram, Georgia, about 20 miles east of Atlanta. (Google Street View)

In total, four dead bodies were found inside of Driskell’s home on Ridge Road in Hiram, Georgia, on the afternoon of January 6. Driskell had been shot in the head. According to police, he was in his bed when officers found him. Driskell was asleep when he was shot.

2. Driskell Worked in the Crimes Against Children Unit

3. His Wife Was Also Found Dead at the Home

Five people lived at the home, Driskell, along with his wife, two sons, and daughter. Some of the children were his stepchildren, reports CBS Atlanta. The station reports that Driskell’s wife was 36-year-old Muachin. She was found dead as was the couple’s 12-year-old daughter, Carolyn, and 21-year-old stepson, Felix Almonte.

4. He Was Killed With His Own Gun

A neighbor told WSB-TV that she heard gunshots coming from the house on the night of January 5. The gun used in the attack is believed to have been Corporal Driskell’s service weapon.

5. The Suspect Is His Stepson 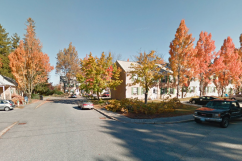 Loading more stories
wpDiscuz
0
0
Would love your thoughts, please comment.x
()
x
| Reply
Sam Driskell has been named as the Paulding County Deputy who was found shot dead inside of his home in Hiram, Georgia. Three other people were found dead in the home.