Gene Patton, known to the world as “Gene Gene the Dancing Machine” from The Gong Show, has died at the age of 82. Here’s what you need to know:

1. He Started as a Janitor

Born Eugene S. Patton, the man who would become known as “Gene Gene the Dancing Machine” was a janitor before becoming a stagehand at NBC when Chuck Barris launched his infamous Gong Show.

Gene’s dancing would interrupt the entire show, and set Barris dancing along with the rest of the cast, crew and audience.

2. His Song Was ‘Jumpin’ at the Woodside’

At seemingly random points during The Gong Show – a precurser to modern shows like America’s Got Talent, but featuring the worst possible performers — Gene would come out dancing and get pelted by random stuff from the wings, from inflatable bananas to an actual human being.

The song, his signature, was Count Basie’s ‘Jumpin’ at the Woodside,’ and would get host Chuck Barris dancing and the audience into convulsions.

3. He Lost Both Legs to Diabetes

Patton was the first African-American member of International Alliance of Theatrical and Stage Employees, Local 33. After The Gong Show, he worked as a camera man for “The Tonight Show with Jay Leno.”

In 2001, Patton lost both his legs to diabetes, the disease that would ultimately claim his life.

4. He Leaves Behind Four Children

According to the obituary as posted online, Patton’s wife, Doris, passed away previously, and Patton leaves behind six great-grandchildren:

5. He Was Featured in ‘Confessions of a Dangerous Mind’

A film based on Barris’ autobiography — the veracity of which has been questioned quite a bit — featured Patton n a cameo as himself, after the loss of his legs.

“Confessions of a Dangerous Mind,” starring Sam Rockwell, is Barris’ own account of how he became a hit man for the CIA while he was hosting The Dating Game, The Gong Show and other hit television shows. Patton is asked his recollections of Barris. 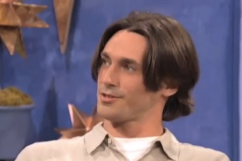 Loading more stories
wpDiscuz
1
0
Would love your thoughts, please comment.x
()
x
| Reply
Gene Patton, known to the world as "Gene Gene the Dancing Machine" from The Gong Show, has died at the age of 82.